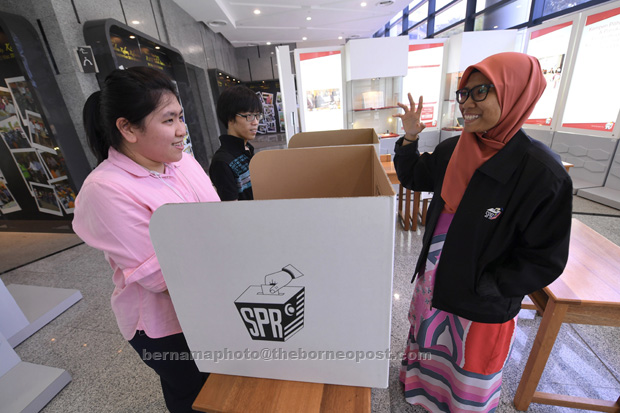 A young woman is briefed by an Election Commission officer in this file photo. Bernama File Photo

This is because the younger generation have different aspirations compared to the older generation, he opined.

“These are the group of young voters who are entering the real world where they have to decide their future path through tertiary education or start working to earn a living,” said Siah.

“Their votes will be very important because now they have a voice to decide policies that mostly affect them in the next five years,” he added.

“Based on our calculation, if automatic voter registration is successfully implemented before the next state election, we will have an estimated 140,000 to 160,000 Sarawakian voters from the age bracket of 18 to 20 years old,” he said when asked to comment on the new law on automatic registration of voters by the age of 18 and lowering of the voting age from 21 to 18.

The Constitution (Amendment) Bill 2019 to lower the voting age to 18 was approved in the Dewan Rakyat with more than two-third majority on Tuesday.

Dewan Rakyat Speaker Datuk Mohamad Ariff Md Yusof said all 211 members of Parliament who were present had voted for the amendment, with the minimum requirement being 148 votes.

The historic occasion also saw Prime Minister Tun Dr Mahathir Mohamad saying in his wrap-up speech that there would be about 7.8 million new voters in the electoral roll by 2023.

He said the government had no plans to make it compulsory for all constituents to go out and vote in elections, as voting was the people’s right.

With this, the voting age, as well as eligibility to contest in election, was lowered to 18, and voters would be automatically registered in the electoral roll.

Whether the new law can be used before the next state election remains to be seen.