Sunday, September 25
You are at:Home»News»Nation»Tiger makes its presence felt in Dungun, Terengganu 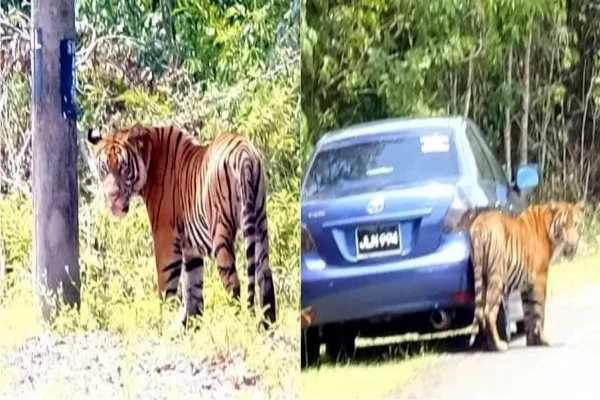 KUALA TERENGGANU: The presence of a tiger recorded in two videos that went viral in the social media since noon has been confirmed to have happened in Dungun, Terengganu.

The Terengganu Department of Wildlife and National Park (Perhilitan) director, Dr Abdul Malek Mohd Yusof confirmed that it had received a report regarding the presence of a tiger at 11.30am today.

“Perhilitan staff have been to the location and the process of capturing the tiger is being carried out,” he said when contacted by Bernama today.

Two videos, each lasting one minute, 25 seconds and 11 seconds respectively, went viral on Facebook when the ‘Pak Belang’ (the striped animal) was recorded in the middle of the highway in Hulu Dungun.

Dr Abdul Malek said the department was still investigating the cause of the tiger’s presence and hoping that the public would not disseminate any false information.

This is the third of such incidents to have happened in Terengganu.

In February 2016, the country was shocked by an accident involving a striped tiger at kilometer 321.2 East Coast Highway (LPT2) near Kemaman which died after being hit by a multi-purpose vehicle (MPV).

In November 2018, a black panther died after being hit by a car at Kilometer 356, East Coast Highway phase 2 (LPT2) near Dungun, Terengganu. – Bernama

Previous ArticleEC: Amendment on reduced voting age not yet in force
Next Article Lido flood mitigation project to start in Feb