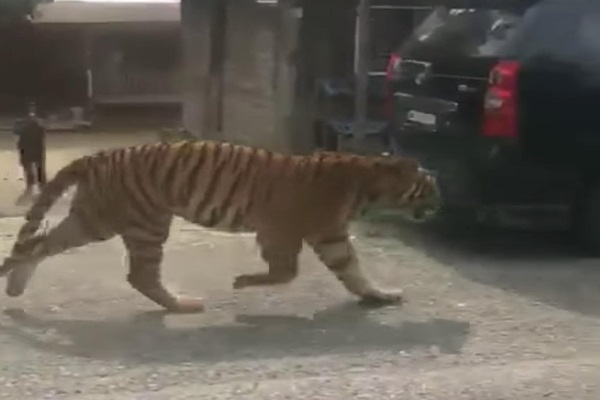 The tiger was seen prowling the streets of Kampung Besul, Bukit Besi in Terengganu.

Dr Abdul Malek said based on the tigers’ tamed behaviour, the department also believed that the tigers were set free to wander in the jungle by their owner before they got lost and entered the village.

“Besides, we also believed that the tamed behaviour displayed by the tigers is probably due to an illness as they appeared less energetic.

“However, we cannot confirm this as the tigers are still at large,” he told reporters when met in the village last night.

Yesterday, a video of the tigers strolling casually in Kampung Besul, Bukit Besi, went viral over the social media.

Dr Abdul Malek said 20 Perhilitan staff had been deployed to the village since yesterday afternoon to find and catch the two tigers.

Several traps have also been set up for the purpose and to ease the villagers’ anxiety and worries, he said.

“Our team is in the midst of catching the tigers. For the time being, the villagers are advised to stop any outdoor or jungle activities to avoid tiger attacks.

“If you stumbled upon the animal, don’t try to get close to it because if it felt threatened, it might attack,” he added. – Bernama