Monday, July 13
You are at:Home»News»Nation»Anwar glad it’s not Azmin

PKR president notes police have not linked his deputy to sex video, says no decision until probe over 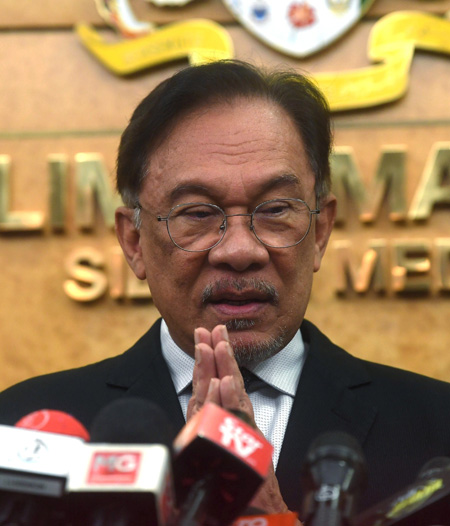 PORT DICKSON: PKR president Datuk Seri Anwar Ibrahim yesterday said he was glad to note that the facial recognition process done on viral sex videos implicating Datuk Seri Mohamed Azmin Ali had turned out negative and the individuals featured could not be linked to the PKR deputy president.

Anwar said although police investigations were ongoing, he was pleased with the outcome so far.

“While acknowledging that the police investigation is still ongoing and based on the latest development issued by IGP, as the party’s president, I am glad to learn that Mohamed Azmin is not involved,” he told reporters when met at the party’s three-day Central Leadership Council Retreat programme here.

Asked on calls by several quarters for the Economic Affairs Minister to resign, Anwar said the party will not make any decisions on the matter until the findings of the investigation were conclusive.

On claims that there were party leaders and members involved in making the video public, Anwar stressed that if this was found to be true, the party will not compromise on the matter.

“Stern action, as outlined by the party constitution, will be taken if there are any party members lawfully convicted.

“Keadilan reiterates that we strongly reject gutter politics,” he said.

The media reported recently that sex video clips portraying two men had gone viral on social media and, on June 12, former Santubong PKR Youth chief Haziq Abdullah Abdul Aziz claimed to be one of the men.

To date, 11 people, including Haziq Abdullah, have been arrested to facilitate police investigations.

Inspector-General of Police Datuk Seri Abdul Hamid Bador recently confirmed that the facial recognition analysis done by CyberSecurity Malaysia could not positively identify the two men in the videos. — Bernama

Previous ArticleE-hailing, taxi and bus drivers reminded to register for SPS before end of month
Next Article Tourism players excited with VOA facilities in Miri