Friday, August 14
You are at:Home»News»Sarawak has what it takes to transform into digital economy – CM 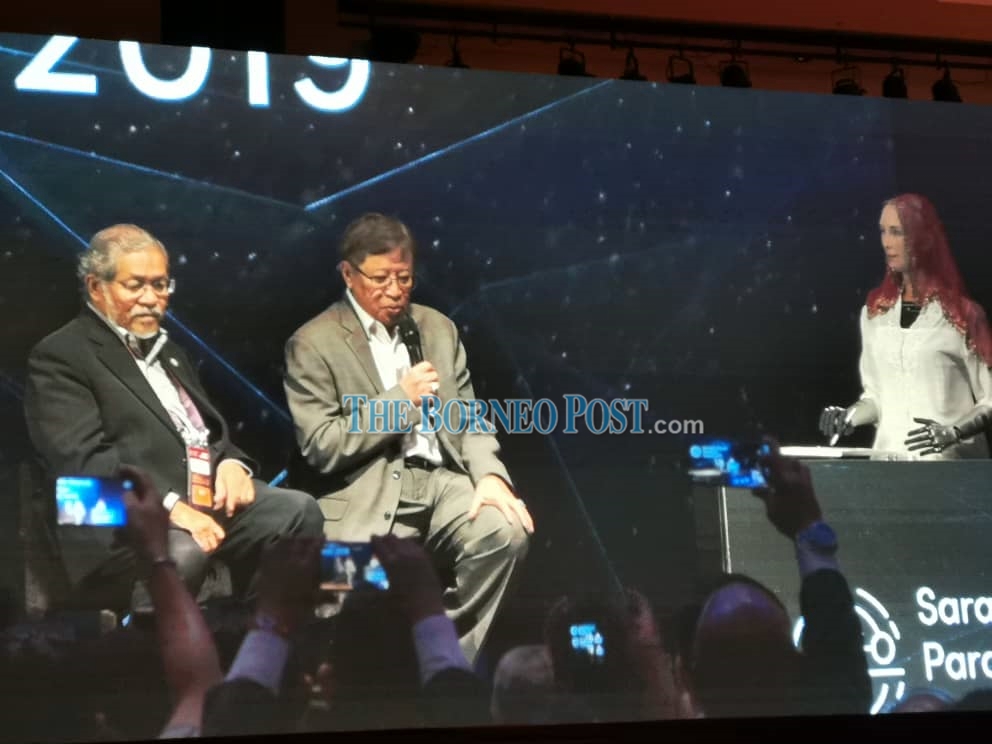 Abang Johari (centre) at an interacting session with Sophia the Robot (right) at the launch.

KUCHING: Sarawak has what it takes to transform its economy from conventional into digital for further advancement, said Chief Minister Datuk Patinggi Abang Johari Tun Openg.

Launching the Sarawak Beyond Paradigm Summit 2019 at Pullman Hotel here today, Abang Johari said Sarawak has to focus on the development of artificial intelligence (AI), biotechnology and nanotechnology to move the state forward.

“Sarawak can develop talents in terms of AI,” he said, adding that Sarawak will continue collaborating with Huawei Technologies towards this end.

While on Huawei, Abang Johari said Prime Minister Tun Dr Mahathir Mohamad once asked him whether he would fear US president Donald Trump given the state’s collaboration with Huawei.

Abang Johari added that Sarawak would not cease collaboration with Huawei just because of the tense relations between Huawei and the US.

He even quipped: “We don’t have Trump in Kuching. We have Johari in Kuching.”

At the launch, Abang Johari interacted with Sophia the Robot powered by AI. The Chief Minister asked Sophia what made her different from other robots.

Sophia responded by pointing out that most robots did not get the chance to interact with the Chief Minister of Sarawak.

She said Abang Johari was handsome when replying to a question, but when the Chief Minister asked whether she was being courteous , she said: “I’m not programmed to lie, so I mean what I say.”

At a news conference after the launch, Abang Johari said the summit was to create awareness of the people on the importance of technology and Industrial Revolution 4.0 (IR4.0).

He said once the community learnt about such importance, it would be more efficient and cost-saving for the government to go through the process.

“AI is an important process to add value to our resources. We can optimise our resources in line with our transformation programme to achieve digital economy,” he said.

Abang Johari said Sarawak is now at the stage of producing the right talents intelligent enough to cope with technology.

“We are on the right path. We need to create the right pool of talents to have bright future and change our economy,” he added.

The summit aimed at bringing together businesses working on IR4.0 solutions and getting them together to initiate ideas, discuss concepts as well as implement them.

Previous ArticleChartered bus gets stuck at Petra Jaya underpass
Next Article S’wak left with no choice but to use own funds to upgrade telco infrastructure: CM