Saturday, September 26
You are at:Home»World»Thai farmers on the cash trail with snail slime 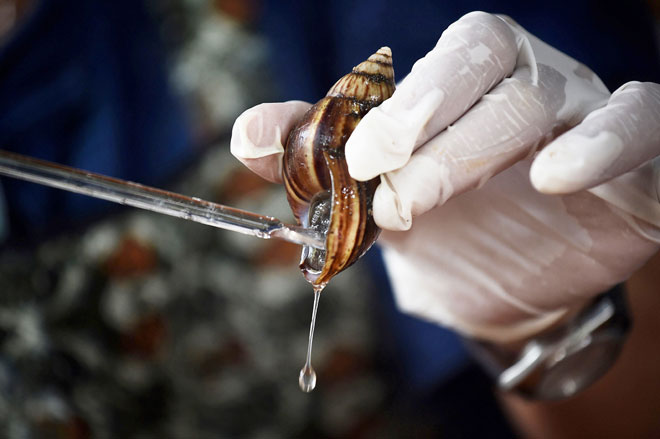 Picture shows Phatinisiri milking a snail of its serum at her farm. — AFP photos

NAKHON NAYOK, Thailand: Giant snails inch across a plate of pumpkin and cucumber in central Thailand, an ‘organic’ diet to tease the prized collagen-rich mucus from the molluscs, which to some cosmetic firms are now more valuable than gold.

The snails at Phatinisiri Thangkeaw’s farm were once the scourge of rice farmers, loathed for eating the buds of new crops.

“Farmers used to throw them on the road or in the rivers,” Phatinisiri told AFP.

“But now they sell them to me to earn extra money.”

It is one of more than 80 farms in Nakhon Nayok province, two hours from the capital Bangkok, cashing in on the global snail beauty market, estimated at US$314 million, according to research group Coherent Market Insights. 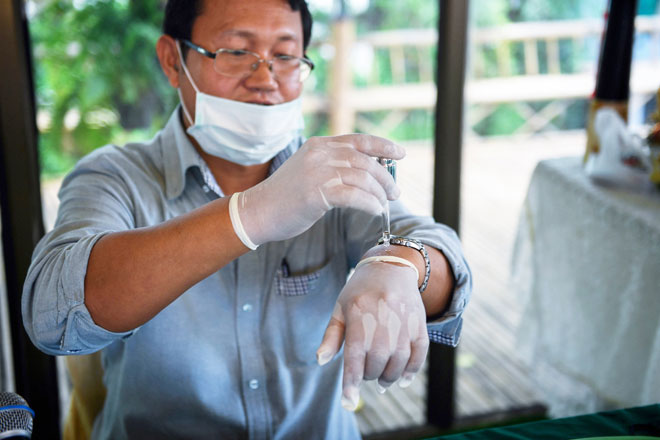 Puttarathuvanun demonstrates how to use the serum at the Acha Snail Park in Nakhon Nayok province.

The precious slime is patiently ‘milked’ from the glands of the snail by dripping water over it using a pipette.

Its raw form is sold to Aden International, a Thai-based cosmetics company that primarily ships its products to Korea and the US.

The sole snail slime producer in Thailand, Aden was started three years ago as a business-savvy solution to the snail infestation in Nakhon Nayok, said founder Kitpong Puttarathuvanun.

And his bet paid off.

Kitpong sells the serum under the Acha brand, but also supplies Korean and American cosmetic companies with a dried powder at 1.8 million baht (US$58,200) per kilogramme, he said.

Gold is currently worth US$46,300 a kilogramme.

Compared to Aden’s snail slime, the mucus produced in China — milked daily instead of once every three weeks in Thailand — is valued at about 80,000 baht (US$2,600) per kilogramme, Kitpong said.

“We found that our slime was very intense because the snails eat everything, including vegetables, grains and even mushrooms … producing good quality slime,” he told AFP, explaining that the mucus can be used to heal sunburn and “heal wounds”.

Somkamol Manchun, the doctor in charge of the purification process, said snail mucus contains collagen and elastin — ingredients that “can make skin firm with less wrinkles”.

It “triggers the skin cells… and helps heal the skin”.

At the moment, no scientific studies have been done on the curative qualities of snail serum and slime, but snail farmer Phatinisiri is already feeling the market heat up.

Two years ago, she was the first in the area to try farming the slime, she said, and villagers readily gave her what they considered pests.

“But many people are doing snail farms now so the competition is high.” — AFP 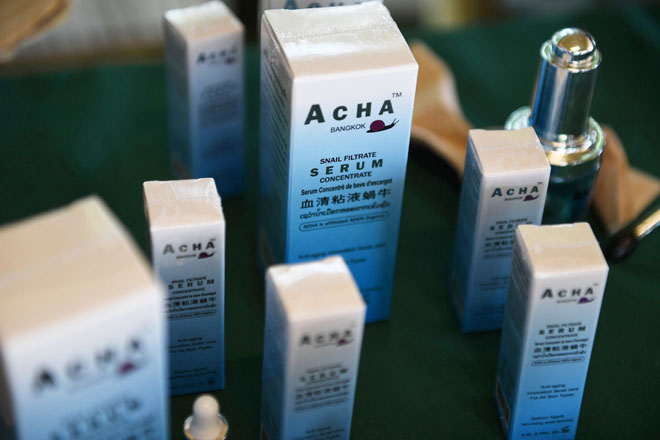