Tuesday, October 4
You are at:Home»News»Everyone can play a part in fight against dengue, says Sibu MP 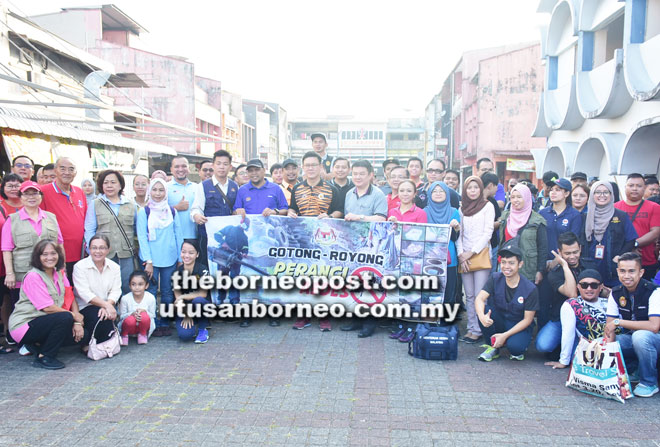 Ling (standing front, centre) joins others in a photo-call after the launch of the anti-Aedes work party at Rejang Park.

SIBU: Every member of society has a role to play in the fight against the dengue menace.

Sibu MP Oscar Ling says such role can be as straightforward as spending only 10 minutes a week to clean one’s house compound.

“By clearing our compounds of empty cans, discarded tyres or empty containers that could collect rainwater and leave it to become stagnant, we can prevent our homes from becoming the breeding grounds for Aedes mosquitoes,” he said in launching the ‘Gotong-Royong Perangi Aedes’ programme held at Rejang Park on Saturday.

Adding on, Ling said he had heard reports about some residents refusing to let the teams from the Health Department to conduct fogging in their areas.

“I would like to call upon these home owners to give their fullest cooperation by allowing the fogging teams to do the fogging, which is a way to get rid of Aedes mosquitoes,” he advised.

“Without close cooperation between everyone in society, we would not be able to combat the dengue menace effectively,” he added.