Monday, August 10
You are at:Home»Sports»Pacquiao mulls future after title stunner 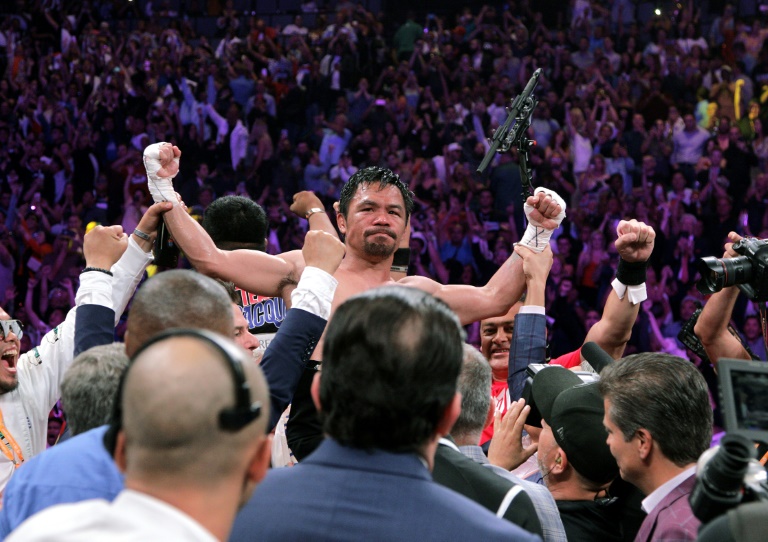 Father Time may be undefeated, as the old boxing saying goes, but Manny Pacquiao is not going down without a fight.

The 40-year-old Filipino legend wrote another improbable chapter in his glittering career on Saturday, with an age-defying split decision victory over the hitherto unbeaten Keith Thurman.

Pacquiao, a full decade older than the 30-year-old Thurman, rolled back the years with a vintage performance that had a sold out crowd at the MGM Grand Garden Arena roaring in delight.

It was the Filipino’s 62nd win of a 71-fight career that has spanned 24 years. Veterans at ringside described the performance as Pacquiao’s best since his dazzling win over Antonio Margarito in 2010.

Thurman, who had returned to boxing in January after a 22-month layoff, admitted he had not been able to cope with Pacquiao’s relentless energy.

Post-fight statistics told the story, with Pacquiao outpunching Thurman by 686 to 571.

A weary Thurman later said he had been chasing the fight from the moment he was sent crashing to the canvas by a stunning combination in the first round.

“He had a lot of momentum from that point,” Thurman said. “I ended up paying attention to the number of rounds. By the time we got to the seventh I was like ‘Damn, we’re in the seventh already’.”

“He’s been in so many wars, he just knows what to do at the right time,” he said. “I had a good training camp but I felt like I needed a better output to go toe to toe with Manny Pacquiao.”

Thurman wasted no time after the fight in requesting a rematch.

While fans would happily line up for a sequel to what is a strong candidate for the fight of the year, Pacquiao’s camp were more circumspect.

Pacquiao, who paid tribute to Thurman’s “heavy hands” and punching power after the fight, pocketed an estimated $20 million from Saturday’s contest.

By recapturing a slice of the welterweight division in such dazzling style, he has thrust himself back into relevance.

Even more lucrative paydays are his for the asking if he chooses to pursue them.

A unification fight with Errol Spence Jr, the International Boxing Federation’s welterweight champion, would sell itself.

The question of a rematch of his 2015 “Fight of the Century” against Floyd Mayweather also continues to linger.

Mayweather, who was at ringside to watch Pacquiao’s masterclass on Saturday, remains firmly retired, and has not fought since his cross-combat spectacle with mixed martial arts star Conor McGregor nearly two years ago.

Leonard Ellerbe, the chief executive of Mayweather Promotions and a close confidante, said last week Mayweather has “zero interest” in a second Pacquiao fight. Whether that interest could be piqued by the prospect of a gargantuan payday remains to be seen.

Pacquiao, whose departure from Las Vegas for the Philippines was delayed until 6pm (0100 GMT) on Sunday as a precaution, suggested he will not fight again this year.

Long-time trainer Freddie Roach, meanwhile, told AFP that Pacquiao’s camp would take their time before choosing their next opponent.

“Someone just asked me ‘What’s next?’,” Roach said. “Well, you know what? We don’t need to think about what’s next for a while.

“Manny can go away and rest and we’ll think about it later on. We need to see what’s out there.”

Roach acknowledged however that he thinks a Mayweather sequel is unlikely to happen.

“I can’t see it,” Roach said. “Floyd’s retired and his people say there is no interest. But there will be other options.”

“Manny never gets tired in the gym, but he got tired in the middle rounds tonight,” Roach told AFP. “I was keeping a close eye on it. But Manny is so fit he got through it and finished strong.

“I think he showed tonight that there’s plenty of boxing left in him, even if he is in his 40s.” – AFP

Previous ArticleMotorcyclist succumbs to injuries after accident at Samarahan
Next Article PSB free contest in any seats in upcoming state election: Wong