Wednesday, June 16
You are at:Home»Science & Technology»French inventor to hover across English Channel on ‘flyboard’ 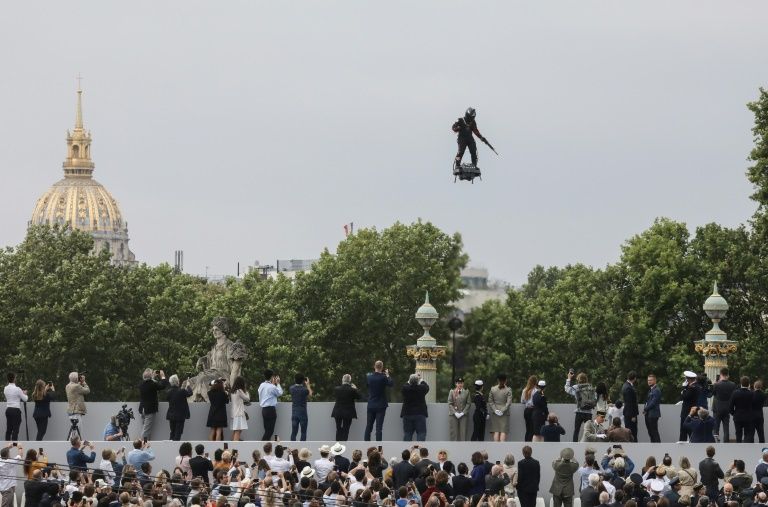 Franky Zapata flew above the Champs-Elysees boulevard in Paris for the annual July 14 parade. AFP Photo

PARIS: French inventor aims to soar across the English Channel this week on a jet-powered “flyboard”, despite authorities warning the stunt is a danger to shipping.

Former jet-skiing champion Franky Zapata has pledged to go ahead on Thursday on his device, which can reach speeds up to 190 kilometres an hour (118 mph).

It will come 10 days days after the entrepreneur wowed crowds when he flew above the Champs-Elysees boulevard in Paris in front of President Emmanuel Macron for the annual July 14 military parade.

But authorities are divided over the daredevil venture, which will mark 110 years to the day since Frenchmen Louis Bleriot made the first aeroplane flight across the Channel.

While the civil aviation authority (DGAC) has approved the crossing from a beach near Calais to Dover in southern England — a distance of around 50 kilometres (30 miles) — local maritime authorities have urged against it on safety grounds.

“We wrote to him to express our disapproval of the project,” the local maritime authority in northern France told AFP last week.

“It’s an extremely dangerous area. We weren’t sure if he’d be able to fly over container ships. The Calais strait sees a quarter of the world’s traffic, including very large boats”.

Zapata has been asked to alert maritime safety officers when he begins the crossing “so they can track him and respond to any problems at sea”.

The Marseille-born engineer, who carries the kerosene for the flyboard in a rucksack on his back, said the concerns were “total nonsense”.

“They let me fly 30 metres (100 feet) away from the President but now they’re talking about the risk of hitting a boat?” he told French TV channel BFM on Friday.

“Even the maritime safety authority agreed (that)… there are a dozen slots during the day when there are no boats.”

Zapata launched his “Flyboard Air” in 2016, the latest addition to his eponymous brand, which includes a water-propelled hoverboard and a flying jet-ski priced at 4,500 euros ($5,000).

The device is powered by five small jet engines and controlled by a handheld throttle, which Zapata activates to take off after strapping himself into a pair of boots attached to the board.

Features include “auto-hover mode” and “quick release boots” in case of an emergency landing on water, according to Zapata’s website.

The French government has praised the “Made In France” invention and even hinted at its military potential.

President Emmanuel Macron posted a video of Zapata’s stunt at the July 14 parade, with the caption, “Proud of our army, modern and innovative”.

French Armed Forces Minister Florence Parly told France Inter radio that the “Flyboard” “can allow tests for different kinds of uses, for example as a flying logistical platform or, indeed, as an assault platform.”

Zapata said the device can run autonomously for around 10 minutes, and that he would need to make a refuelling stop on a boat in English waters.

“We were originally planning to refuel mid-flight but we had to change all that about ten days ago,” he told French TV channel BFM on Friday, explaining that French authorities had denied him permission to re-fuel in French waters.

A second boat will be waiting nearer the English coast “in case a second refuel is needed”, said Anna Venekas, a spokeswoman for Zapata.

The English Channel, a 34-kilometre (21-mile) stretch of water between France and Britain, has attracted daredevils before.

In 2010, America’s Jonathan Trappe crossed the Channel dangling from a bunch of helium balloons.

And in 2003, Austrian skydiver Felix Baumgartner — who went on to jump from the edge of space in 2012 — glided from England to France wearing an aerodynamic suit fitted with a six-foot carbon-fibre wing. – AFP