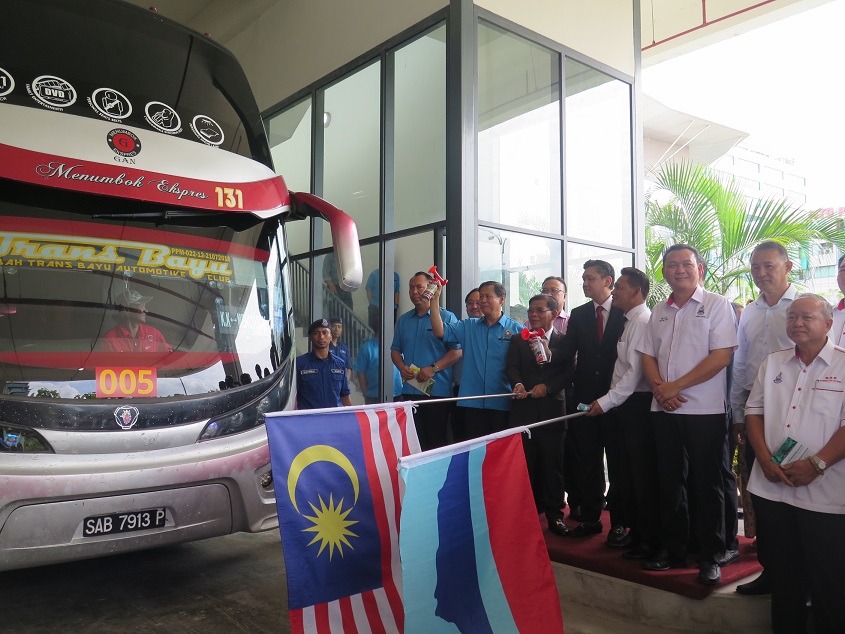 Arifin (sixth right) waving the Malaysian flag to launch the start of the bus service at KK Sentral.

KOTA KINABALU: The government’s effort to improve the public transportation service is becoming a reality with the launch of the KK Sentral Bus Terminal which began operating yesterday.

The bus routes that were started were from Kota Kinabalu to outside destinations such as Beaufort, Menumbok, Sipitang, Lawas, Limbang and Brunei.

According to Assistant Minister to the Chief Minister, Arifin Asgali yesterday, KK Sentral would ease the public in getting bus services in Kota Kinabalu.

KK Sentral consists of two blocks of commercial building which are Kks Block A and Kks Block B which are equipped with an information counter, KK Sentral’s administrative office and bus tickets sale counter, bus schedules and suraus for both male and female on Block A; and four bus platforms (maximum capacity of 16 buses) and four eateries, 114 handicraft lots which is scheduled to begin operating on September 1 or latest by the end of the year and 499 car park lots as well as office lots and shop lots for rent.

The building is also equipped with baggage compartments, security and monitored by close circuit television at all floor levels.

He said that the KK Sentral will operate daily between 6 am and 10 pm.

He also urged those using KK Sentral to abide by the regulations set and to ensure the cleanliness of the area at all times.

In an interview later, Arifin explained that the RM54 million project was fully completed in 2017 but its launch was delayed due to several factors including the transition from the old Barisan Nasional government to the present one.

He added that KK Sentral will act as a transit point for buses to drop their passengers who are from Putatan / Kapayan, Penampang and Inanam.

“We are finalising with them but there are conditions,” he said.

He also mentioned that KK Sentral was one of the four bus terminals planned — the other three were supposed to be located in Kapayan, Inanam and Penampang.

He said that the land for the projects were ready but there were no allocation to start the project.

He also said that the Chief Minister, Datuk Seri Panglima Shafie Apdal has been informed of the matter and that the latter has instructed the consultant to prepare a letter which Shafie will later present to the Federal Government for allocation consideration.