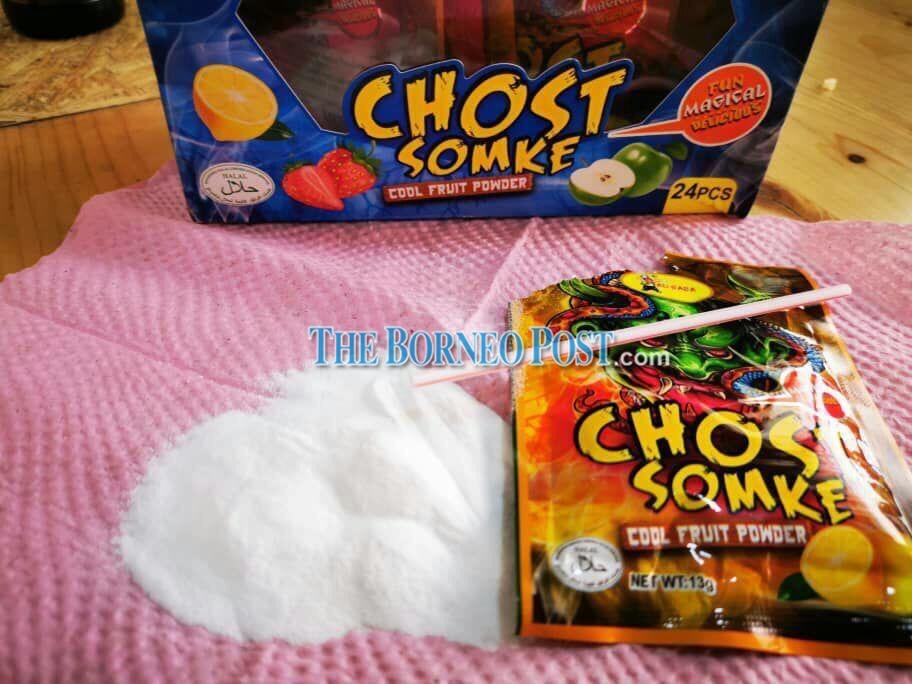 The Domestic Trade and Consumer Affairs Ministry (KPDNHEP) Sarawak has launched a statewide operation to check if Ghost Smoke candies were being sold in the state. The image is of a similar product labelled as ‘Chost Somke’, which is being shared over social media.

KUCHING: The Domestic Trade and Consumer Affairs Ministry (KPDNHEP) Sarawak has launched a statewide operation to check if Ghost Smoke candies were being sold in the state.

Its director Datuk Stanley Tan said the operation was launched simultaneously throughout Sarawak.

“The Domestic Trade and Consumer Affairs Ministry Sarawak is conducting a statewide operation and after we have concluded the operation which is expected to be later this evening, then we will know whether Ghost Smoke candies are sold in Sarawak or not,” he said when contacted by Utusan Borneo today.

The media recently reported on the fears of parents regarding the sale of Ghost Smoke candies which emit smoke like the cigarette when sucked.

Tan disclosed that the ministry’s headquarters had issued an instruction to all offices and branches to conduct checks to find premises selling Ghost Smoke candies.

“As of now, we have conducted checks on six premises in Kota Sentosa market, Mile 7, Kuching and found that all of them did not sell the Ghost Smoke candies.

“The premises were advised not to sell the product or receive stock from the supplier,” he said, adding that actions including confiscation could be taken against traders who were found selling the candies.

A check by The Borneo Post revealed that the candies for sale were instead labelled ‘Chost Somke’ and appear to be a knockoff of the Ghost Smoke candies in question – however, they mimic the same effect as the original candies.

Meanwhile, The Star reported that similar operation had been conducted in Sabah, with officials from KPDNHEP Sabah started an operation around Papar at around 10.30am and several other areas.

Schools in Sabah had been alerted on the sale of such candies and urged to monitor their students.

Sabah Education Department director Mistirine Radin was reported by the news portal as saying that a circular from the Sabah Health Department had been issued to schools in Papar district, where the candies were reportedly first sold.

“However, our jurisdiction lies within the school grounds, so we can make sure that our school canteens do not sell these candies,” she said.

She urged parents in other districts to keep an eye on their children and to stop them from buying the candies.

Mistirine said they would wait for further directives from the Education and Health Ministry on the next course of action.

Dr Wan Azizah also did not discount the possibility that Ghost Smoke could be the beginning of the drug addiction problem.