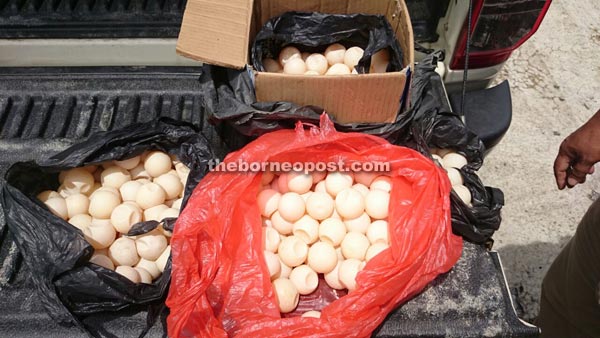 The turtle eggs seized in Sandakan are estimated to be worth RM12,600. File photo depicts a seizure made in 2015 of nearly 300 eggs in Serian Market in Sarawak.

SANDAKAN: The Marine Police Force (PPM) seized 7,000 turtle eggs believed to be smuggled from the Philippines for the local market in Sungai Batu 2 near here, yesterday.

Sabah’s PPM Region 4 commander, ACP Mohamad Pajeri Ali, said the turtle eggs estimated at RM12,600, were found inside the pump room of a boat that was left at the river at 2.30am.

He added that the raid was carried out based on information from officers and members of the Marine Intelligence Unit from a PPM patrol boat that detected the boat speeding before being stranded in shallow waters.

The eggs belonged to the skipper of the boat, but he escaped without them, said Mohamed Pajeri in a statement here today.

He added that the seized eggs were brought to the PPM Operations headquarters here for documentation and were later handed over to the Sandakan Wildlife Department for further action. – Bernama