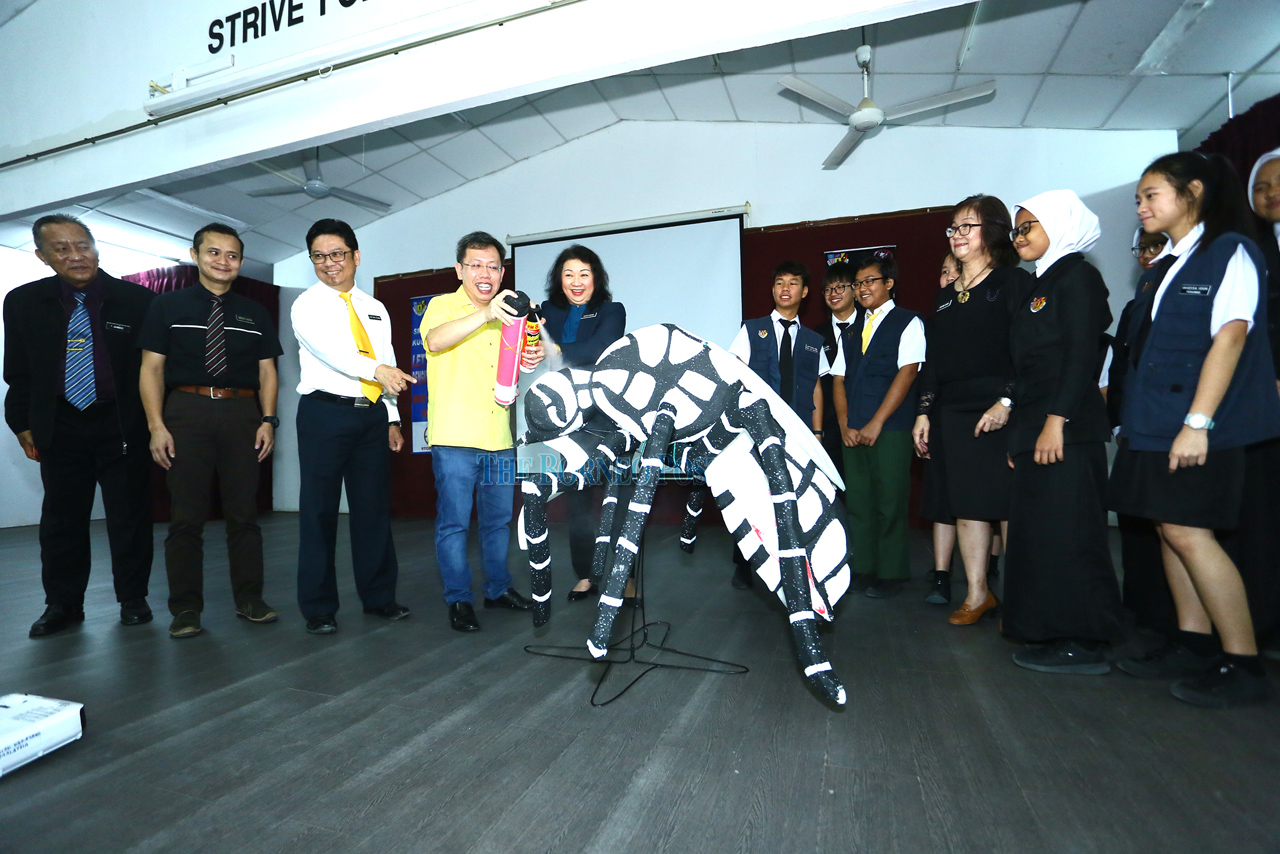 Speaking during the launch of an anti-dengue campaign at SMK Bandar Kuching No. 1 yesterday, he said it was important to know the facts about dengue and the Aedes mosquito in order to act on it.

He gave example of a biological warfare method as one application of science in tackling the problem, in which Aedes mosquitoes are infected with the Wolbachia bacteria to prevent their reproduction.

“I share this knowledge so that you know the application of science, (whether) you are Science students or not.

Dr Sim informed the students that Aedes mosquitoes can breed in any place as long as there is clean and still water available.

“Even in a rubbish dump area, there may be clean water inside plastic bottles. In
unoccupied houses, there may be still water in the bathrooms and toilets.

“There are places that you and I don’t expect (Aedes mosquitoes to breed) and these are where dengue is,” he said.

He added that apart from knowing where to look, another prevention measure related to lifestyle or way of doing things.

He said even though Aedes mosquitoes are said to be active in the early morning and evening, it does not mean people should no longer exercise during those times.

“They should still exercise but must take preventive measures like wearing long-sleeved tops, using insect repellant and so on,” he added.

He also said that in the first six months, there were some 65,000 dengue cases reported nationwide with 100 lives lost. For Sarawak, he said 924 dengue cases were reported over the same period.

“Aedes not only causes dengue but other diseases like Chikungunya and Zika. If they breed, you bleed,” he quipped.

Meanwhile, SMK Bandar Kuching No.1 principal Sandy Wong SMK said the school is one of the three to represent Sarawak in the national level anti-dengue competition.

She explained that the competition is in the form of a video submission to the Education Ministry, due in the first week of September.

“What the students are doing is to go around cleaning up the school first, followed by their homes.

“Then we go to various institutions, even old folks’ home, and other places nearby to participate in a community clean-up.

“We want to raise the awareness in the community that we should be Aedes-free. No Aedes, no dengue.

“That is our main agenda,” she told reporters.

Wong informed that all activities carried out by the school, both within the school and the community outside, will be taken into account and compiled into their five-minute video.

She added that even though the whole school is involved, 40 students and 10 teachers have been identified to conduct the community work.

The result of the competition will be announced in October.