Tuesday, July 27
You are at:Home»News»Dev Kumar returns to Sarawak as deputy police commissioner 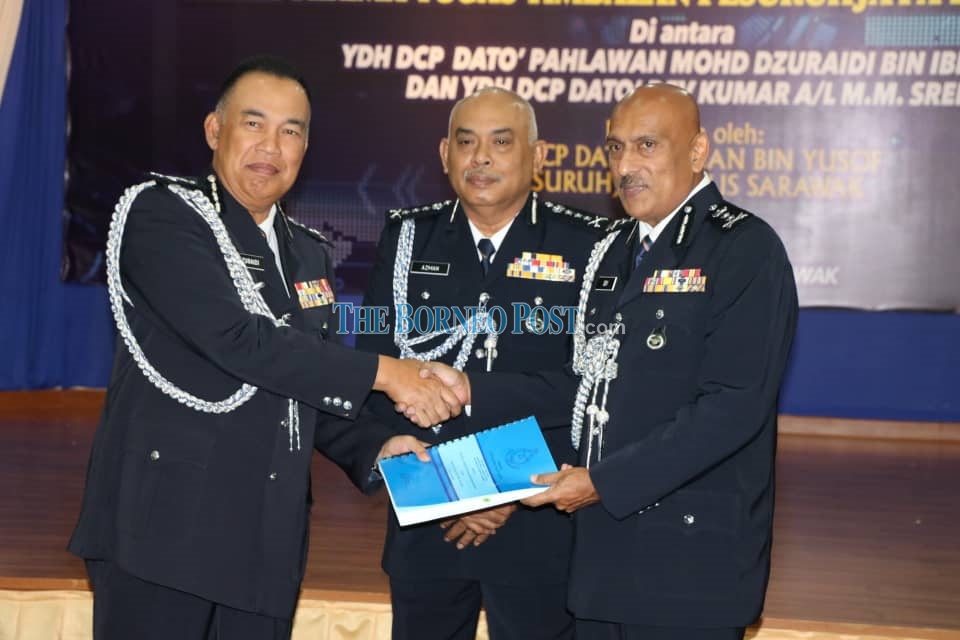 Dev (right) exchanging documents with Dzuraidi (left) at the handing over of duties at the Sarawak IPK this morning, as Azman looks on.

Speaking to reporters after the handing over of duties at the Sarawak Police Contingent Headquarters (IPK) here this morning, Dev said he will try to overcome the challenges that they are facing in an evolving era as well as to further improve the integrity of the force.

“I will try my very best to give the best services to the people of Sarawak,” said Dev ,who is no stranger to the state.

Dev was as an Investigating Officer (IO) at the Sentral Police Station between 1982 to 1989 after completing his training in Pulapol Kuala Lumpur.

After seven years, he was then transferred to Semenanjung Malaysia and then back to Sarawak as the Sarawak Criminal Investigations Department (CID) head between 2015 to 2018.

Just after the 14th General Elections, Dev was promoted to the rank of Deputy Commissioner of Police (DCP) and reported for duty as the Bukit Aman Crime Prevention and Community Safety Department deputy director of operations on May 14, 2018.

“This is my third time serving in Sarawak and I am thankful to PDRM for giving me the trust to provide my service as the deputy police commissioner in the state,” he said.

With the support and commitment of the whole IPK, Dev is confident that he will be able to shoulder the responsibility as the state’s second top cop.

In his outgoing speech, Dzuraidi conveyed his gratitude to the Sarawak IPK for their support throughout his service in Sarawak which started in July 2017.

“It is a great honour to serve in PDRM Sarawak and a sad moment to leave Sarawak as the officers and the community here have molded me to become more knowledgeable and an experienced officer,” said Dzuraidi.

He also said the Sarawak IPK is lucky to have Dev as the deputy police commissioner due to his vast experience in policing matters.

The handing over ceremony was witnessed by Sarawak Police Commissioner Dato’ Azman Yusof.

Also present at the ceremony were the heads from the various departments under Sarawak IPK and various district police chiefs.