Saturday, January 28
You are at:Home»News»Nation»Short-finned pilot whales sighted in Terengganu waters
For the freshest news, join The Borneo Post's Telegram Channel and The Borneo Post on Newswav. 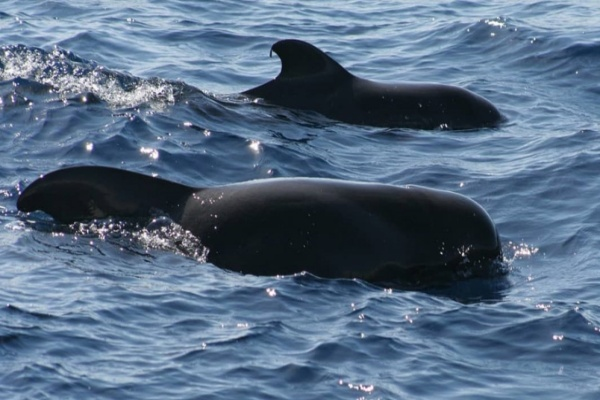 The whales were sighted near Perhentian Island in Besut waters. Bernama Photo

KUALA TERENGGANU: Barely nine days after a pair of orcas or killer whales sighted in Terengganu waters for the first time ever, a pod of short-finned pilot whales have been making an appearance in the state waters on Wednesday (July 24).

Rantau Abang Fisheries Research Institute (FRI)’s Marine Mammals branch head Mohd Tamimi Ali Ahmad said the short-finned pilot whales were found swimming near Perhentian Island in Besut waters, 30 kilometres from the beach and at a depth of between 30 and 35 metres.

“The incident was captured by fishermen in a 39-second video clip.

“Based on the video recording and the fishermen’s conversations, they said the mammals are very large in size and in a big group, I believe they are short-finned pilot whales or its scientific name Globicephala Macrorhynchus because they have this habit of moving in a large group of 10 to 50,” he said in a statement today.

On July 16, a pair of orcas appeared for the first time in the waters off Terengganu near the Petronas oil drilling platform in Kerteh.

Mohd Tamimi said the adult short-finned pilot whale would have body length between three and seven metres, weighing between 1,000 and 3,000 kilogrammes (kg); while the newborns would be between between one and three metres long and weighing between 60 and 500kg.

According to records available at the Rantau Abang FRI, the short-finned pilot whale has never been spotted in Terengganu waters and July 24 recorded historical event with the appearance of the marine mammals for the first time ever.

He said the last time the short-finned pilot whale was spotted was in Sarawak in 2013 and the dead marine mammal was found beached in Labuan in 2015.

Being active predator of the oceans ecosystem, the short-finned pilot whales primarily feed on squid, but will also feed on certain species of fish and octopus.

“The short-finned pilot whales are found in most waters around the world with the favourable habitats, far from the coast, slightly warmer water and has a high density of food such as squid … perhaps that’s why these whales were going through the Terengganu waters due to current squid season and turned the South China Sea as part of its migration route,” he said.

In the waters of California, the United States, the whale population can easily be spotted during the squid season but will disappear and migrate to other oceans once the food supply depleted.

The short-finned pilot whales have become endangered and nearly extinct in some parts of the world such as in countries like Japan, the Philippines, China, Taiwan, and Vietnam as fishermen there consumed these marine mammals as part of their diet due to the meat that contained high protein as well as its soft texture.

He said the short-finned pilot whale was listed as one of the endangered marine species in Malaysia and the Department of Fisheries protected it through enforcement of Section 27 of the Fisheries Act 1985 on Aquatic Mammals or Turtles in Malaysian Fisheries Waters as stipulated under the newly amended Fisheries (Control of Endangered Species of Fish) (Amendment) Regulations 2019.

The short-finned pilot whale was also protected under the International Union for Conservation of Nature (IUCN) as one of the world’s endangered marine species, he said. – Bernama

Previous ArticlePositive mindset necessary for implementation of new ideas such as LRT, says Fatimah
Next Article PCG to spend US$12 bln for future deals to 2037