Monday, February 17
You are at:Home»News»SUPP Education Bureau: Dental schools were previously recognised by govt, backs up claim with evidence 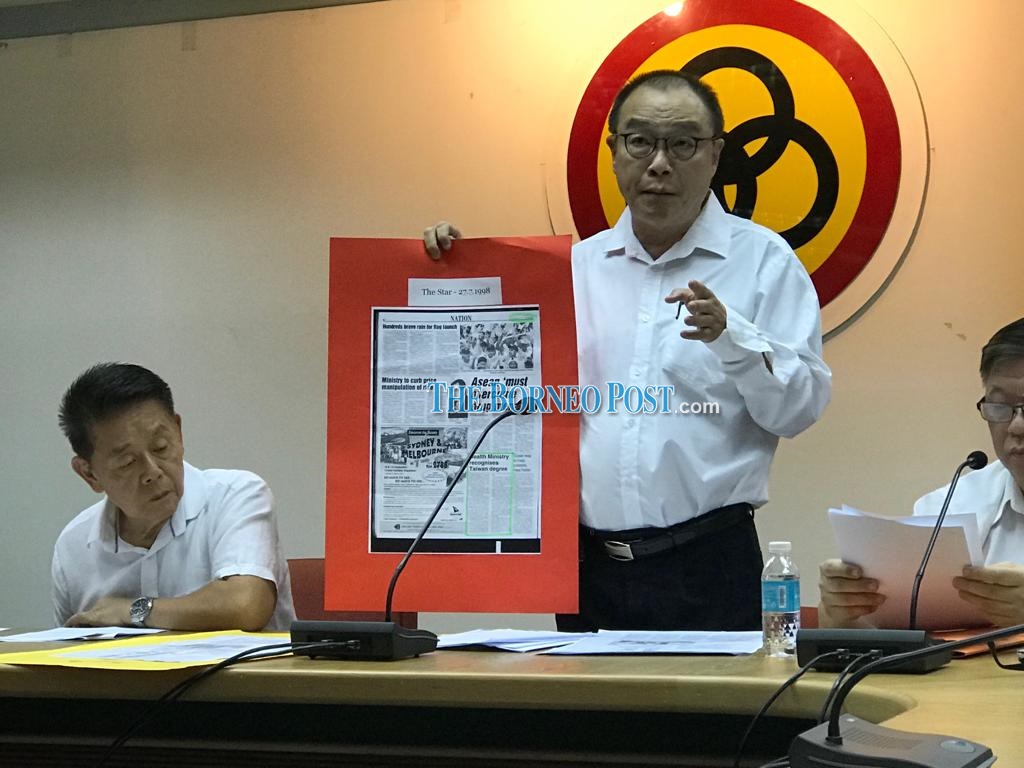 Wong (standing) speaking at the press conference while holding up previous news reports as evidence of their claim.

SIBU: The Education Bureau of the Sarawak United People’s Party (SUPP) has stood its ground, saying that the seven dental schools in Taiwan had previously been recognised by the government.

In a press conference this morning, Dudong branch chairman Wong Ching Yong said the bureau had done further investigation and had gathered reliable sources from newspapers and magazines to support their argument.

He said news reports from local Chinese newspapers published on Feb 14, 1996 and in a national paper on July 27, 1998 confirmed that the Ministry of Health had recognised seven dental schools and eight medical schools in Taiwan.

From the gathered materials, the announcement from the Malaysian Dental Council (MDC) President Datuk Dr Noor Hisham Abdullah’s disclosure on the non-recognition of seven Taiwanese dental schools is an utter denial of historical facts, he reiterated.

“We cannot accept the fact that the seven dental schools were never recognised by the Malaysian government,” he pointed out.

On July 17, SUPP held a press conference urging the MDC president to explain to the public on the decision to remove seven dental schools in Taiwan from the 2nd Schedule of the Dental Act 2018.

In a response, Dr Noor Hisham said the schools were never recognised under the approved list.

He said according to a news article on Feb 14, 1996, during a meeting between representatives of the The Federation of Alumni Associations of Taiwan Universities, Malaysia (FAATUM) led by Javet Tay and the healthy ministry, the then health minister Chua Jui Ming disclosed that the Ministry had recognised seven dental schools and eight medical schools of Taiwan.

He claimed that that Chua further disclosed that MDC resolved in the council meeting held on Jan 8, 1996 to approve the seven dental schools of Taiwan under section 12(9) of the Dental Act 1971.

“The said news further reported that a team of council members from MDC headed by the then Director General of Health of Malaysia Tan Sri Dr Abu Bakar Suleiman had on July 7 until July 22, 1995 visited medical and dental schools in Taiwan to carry out accreditations on the respective medical and dentistry degrees.

Such visits were later reported in the FAATUM 30th Anniversary Special Issue Magazine on July 23, 2003.

Then, an English national paper published on July 27, 1998 reported that Chua further confirmed that between 1996 until 1998, eighty dental graduates from the seven dental schools in Taiwan had been registered by the MDC and were serving in government hospitals.

He said that the report said Chua confirmed the government had recognised and gazetted the dental degrees of the seven Taiwanese universities by December 1995.

“The current membership of FAATUM is about 50,000 and is a formidable force to be reckoned with,” he pointed out.

He also said that their research found that the pharmaceutical degrees from three Taiwan universities namely the National Taiwan University, Taipei Medical School and the Kaohsiung Medical were recognised and gazetted on July 4, 1997, Nov 4, 1999, and Nov 30, 1998 respectively.

He said the then parliamentary secretary to the Minister of Education Datuk Mahadzir Mohd Khir also confirmed that the ministry had already recognised the medical, dentistry and pharmaceutical degrees from Taiwan.

“The reply was given during a parliamentary debate session whilst answering the query from YB Chong Eng (DAP representative of Bukit Mertajam) whereby Datuk Mahadzir clearly pointed out that the allegation that the Malaysian government refused to recognise tertiary degrees from Taiwan was not true.

“It is our view that the statement given by Datuk Mahadzir in Parliament was and is an irrefutable evidence to prove that the seven dental schools from Taiwan had been duly recognised by the Ministry of Health,” he said.

With such evidence, Wong said Noor Hisham’s recent announcement was unfair and unreasonable and is akin to a hard blow against those who are currently studying dentistry in Taiwan and also on those who intended to come back to Malaysia to practice.

“If as what Dato Noor Hisham had stated, that the dental degrees from Taiwan were never recognised by Malaysia, how can he explain the local news about admission and recognition of the dental schools from Taiwan?” he asked.

He also said that those who studied dentistry and graduated from Taiwan had been practising in Malaysia without any hindrance or obstacle previously.

He said this further proved the fact that dental degrees from Taiwan were in fact recognised locally.