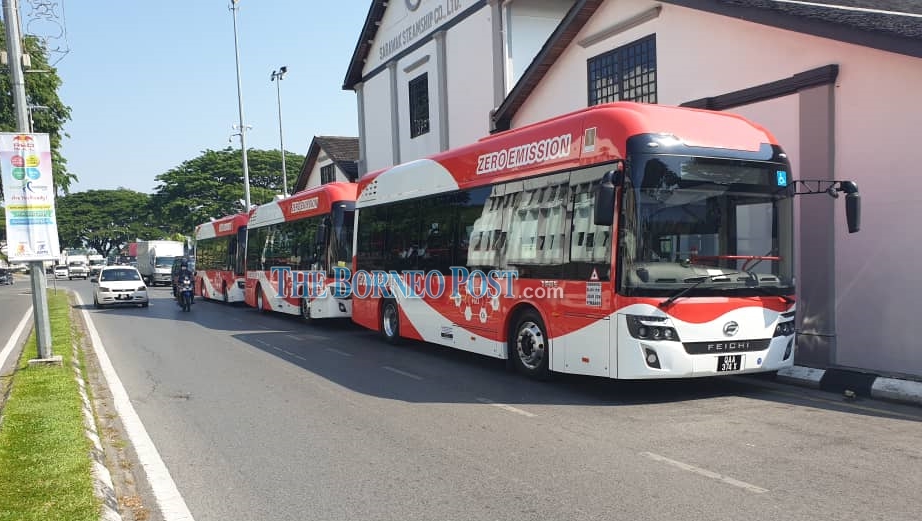 The hydrogen buses were spotted around the city today as they undergo their trial runs until Aug 14. Photo by Saibi Gi

KUCHING: Malaysia’s first hydrogen buses made their debut appearance on the city’s streets today but without passengers, as they are on a trial run until Aug 14.

With their red and white colour scheme and with the words ‘Zero Emission’ and ‘Hydrogen Bus’ prominently plastered on them, the three buses were easy to spot on the streets and drew a lot of attention.

The Sarawak Economic Development Corporation (SEDC) announced yesterday that the Road Transport Department (RTD) and Commercial Vehicle Licensing Board (CVLB) had given their approval for the commissioning of the service here.

SEDC general manager Abdul Hadi Datuk Abdul Kadir said in a press statement that the buses would not be ferrying any passengers during the trial run, because they needed to monitor their performance and address any refueling issues that could arise due to factors such as the weather and heavy traffic.

The trial run would be closely monitored by officers from SEDC and engineers from Sarawak Energy Berhad (SEB), Foshan Feichi Automobile Manufacturing Co Ltd of China, and Linde Hydrogen FuelTech.

Abdul Hadi added that the trial run would test the buses on the consumption level of hydrogen fuel, to determine the filling capacity, and the optimisation of the hydrogen plant operation.

The hydrogen buses were met with skepticism and criticism when it was mooted by Chief Minister Datuk Patinggi Abang Johari Tun Openg last year.

However, Abang Johari was confident that the buses would be beneficial for the city as they are cheaper to operate and friendlier to the environment.