Saturday, February 29
You are at:Home»News»Court»Brothers charged with vandalising fire hydrant, selling off parts for RM25.80 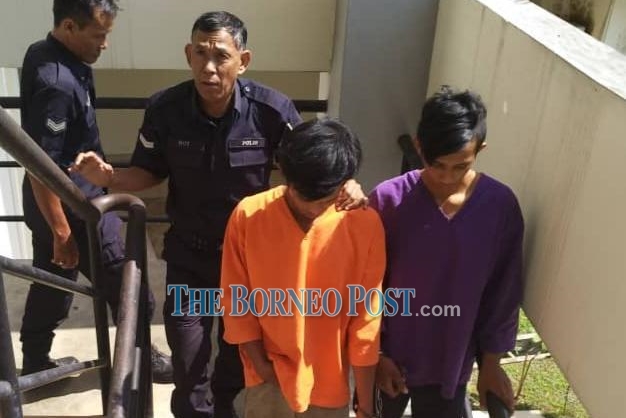 The two brothers being escorted at court during their trial.

KUCHING: Two siblings who were arrested for vandalising a fire hydrant and stealing its parts along with a outlet pillar thread and cap at Taman Desa Wira recently were charged at the Magistrate’s Court this morning.

Judge Zubaidah Sharkawi imposed a fine of RM1,000, in default and one months’ jail if he failed to pay the fine.

His brother Syahrizan, who was categorised as a minor offender, was released with a court bail of RM500 while waiting for a social report due out on Sept 3.

Both were charged with disposing of the stolen items by selling them to an owner of a secondhand shop at Batu Lima, Jalan Kong Ping for RM25.80 on July 31.

The police also seized a motorcycle, two helmets, a hammer and two shirts as evidence.

Both siblings were arrested at a house at Kampung Segedup after their pictures went viral on social media when they committed the crime.

They also admitted to consuming the drug methamphetamine when they committed the crime.

According to Padawan police chief Aidil Bolhassan, Rizmanie also has prior criminal records, including drugs abuse.

Previous ArticleMaszlee: Jawi for all Year 4 pupils decided in 2014, will not be tested or assessed
Next Article Mayor says he’s in the dark over rumours about extension of service