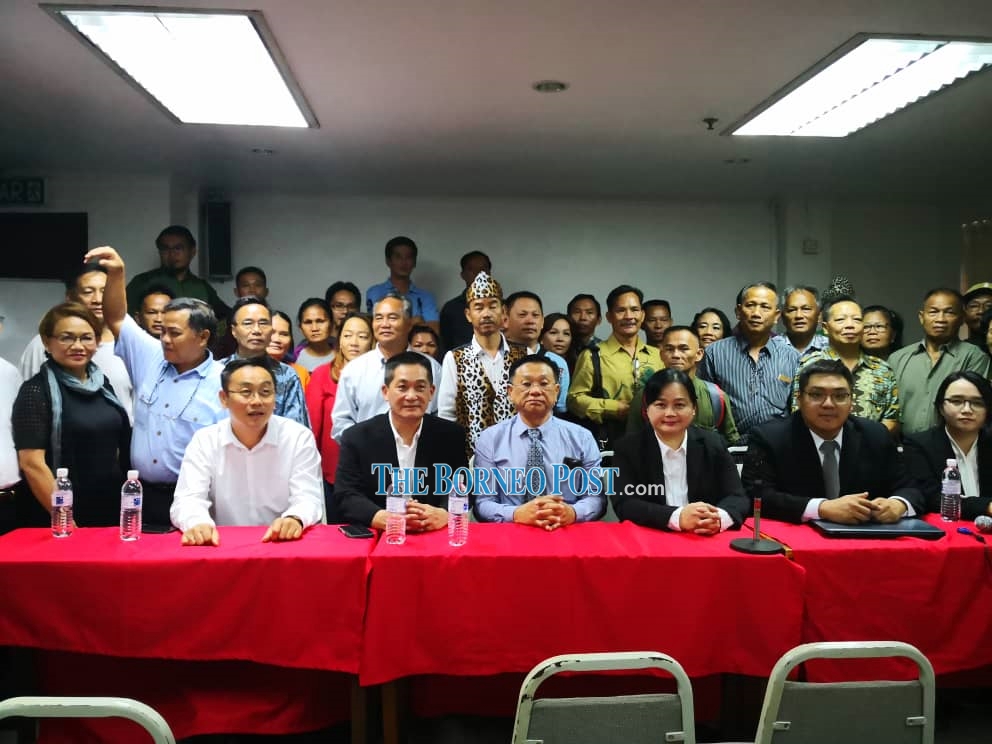 See (seated, third left), Dr Teo (seated, centre) and other lawyers in a photo call with the villagers during the press conference.

MIRI: The Penan and Berawan-Tering communities of Tutoh-Melinau region in Upper Baram have filed a suit here today to nullify the issuance of two provisional leases by the Sarawak government for an oil palm plantation adjoining Gunung Mulu National Park.

They claimed that the 4,440ha — granted to a company called, Radiant Lagoon in December 2008 for a period of 99 years for the plantation — is located within their native customary rights (NCR) land, said a statement issued at a press conference after the suit was filed.

They pointed out that their land claims were investigated from 1962 to 1970 and the then Residents of the Fourth and Fifth Divisions had decided on the boundary.

They also cited the national park’s management plan carried out by the joint expedition of the Royal Geographical Society and the State government in 1977 and 1978 on the area for the Penan Settlement Reserves.

“In their Statement of Claim, the Plaintiffs have also claimed that the development of an oil palm plantation had shown that the Sarawak State Government had abrogated and reneged from its commitment to preserve the site, a commitment expressed in the 24th Session of the World Heritage Committee in 2000, when the Gunung Mulu National Park was inscribed as a World Heritage Site,” the statement said.

The plaintiffs also accused a Penghulu, two village headmen and a councilor of misrepresentation to the company that they have the authority and capacity to settle all NCR claims on the land and to ensure that the oil palm plantation operation will not be affected.

Besides the annulment of the two provisional leases, the plaintiffs wanted the company and its contractors and workers be prohibited and restrained from trespassing, clearing, using or occupying their land.

Their lawyer, See Chee How, told the press conference that the plantation affected more than 5,500 villagers.

He pointed out that the suit was aimed at stopping the plantation which not only destroys the homes of the Penan and Berawan but also of the outstanding universal values that had led to the recognition of the area as a World Heritage SIte.

“I think the Penan and Berawan community living in the area are doing us a good service by defending the land and nature we have in Sarawak,” said See, who is leading a team of six lawyers.

He also said the location of the land was between the Deer Cave in Mulu, which is inhabited by more than three million bats, and Labi National Park in Brunei.

“These bats will go elsewhere and don’t come back to the Deer Cave anymore and this is not how it should be handled by the state government,” said See, who is the Batu Lintang assemblyman.