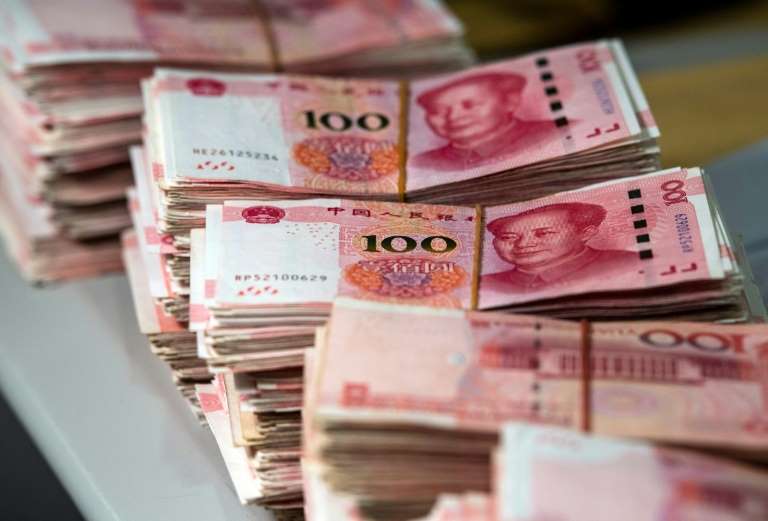 Both the onshore and offshore yuan breached the 7.0 level against the dollar, which investors see as a key threshold in currency value. AFP Photo

Washington’s sudden move came the day China allowed the yuan to fall below 7 to the dollar for the first time in about a decade — provoking US President Donald Trump’s ire and sending global equities markets diving into the red.

Wall Street on Monday posted its worst one-day losses of 2019 as hope of any near-term resolution to the year-long trade war between the world’s top two economies appeared to slide out of view.

In a Twitter outburst earlier in the day, Trump had angrily accused Beijing of weakening the yuan “to steal our businesses and factories.”

US Treasury Secretary Steven Mnuchin, “under the auspices of President Trump, has today determined that China is a currency manipulator,” the Treasury Department said in a statement late Monday.

As a result, Mnuchin will engage the International Monetary Fund “to eliminate the unfair competitive advantage created by China’s latest actions,” the statement said.

The new designation is largely symbolic, since it calls for consultations with countries found to be manipulating their currencies.

But it could gain teeth if the Commerce Department begins imposing tariffs on countries found to be undervaluing their currencies, as that department said earlier this year it plans to do.

The volley lobbed across the Pacific on Monday was sure to shake the global economy even further, with markets doubtful that either side is willing or able to prevent hostilities from spinning out of control.

The yuan’s weakening came just days after Trump announced plans to raise tariffs on another $300 billion in Chinese imports starting September 1, accusing Beijing of failing to live up to commitments in trade negotiations.

That would mean virtually all of the roughly $660 billion in goods exchanged annually between China and the United States are subject to trade barriers.

The battle has sapped business confidence and undermined both countries’ manufacturing sectors just as the world economy’s slowdown worsens.

Activity in the US service sector hit a three-year low last month, survey data showed Monday, confirming a step-down in US economic growth.

Trump’s move was also sudden: On the campaign trail, he had loudly pledged to designate China a currency manipulator but his administration had until Monday refrained from doing so.

The Treasury Department had instead kept China on a “monitoring list” of countries subject to close scrutiny due to their currency practices, including in its most recent report released in May.

The yuan is not freely convertible and the government limits its movement against the US dollar to a two percent range on either side of a central parity rate which the People’s Bank of China (PBOC) sets each day to reflect market trends and control volatility.

“It appears that the tariffs hike suggests the return of tit-for-tat moves and a suspension of trade talks, and the PBOC sees no need to keep the yuan stable in the near term,” Ken Cheung, a senior currency strategist at Mizuho Bank, told Bloomberg News.

In a statement on Monday morning, the PBOC said the exchange rate against the US dollar had been “affected by unilateralism and trade protectionism measures and the imposition of tariff increases on China.”

The central bank said the yuan remained “stable and strong against the basket of currencies” and said it would “resolutely crack down on short-term speculation and maintain stable operation of the foreign exchange market and stabilize market expectations.”

It went on to say that it had the “experience, confidence and ability to keep the RMB exchange rate basically stable at a reasonable and balanced level.”

Julian Evans-Pritchard, senior China economist with Capital Economics, said the PBOC has “effectively weaponized the exchange rate” by linking the currency with the US trade war.

“Given that their goal is presumably to offset some of the impact from additional US tariffs, they are likely to allow the currency to weaken further, probably by 5-10 percent over the coming quarters,” said Evans-Pritchard. – AFP