Wednesday, February 19
You are at:Home»World»China warns Hong Kong protesters against playing with ‘fire’ 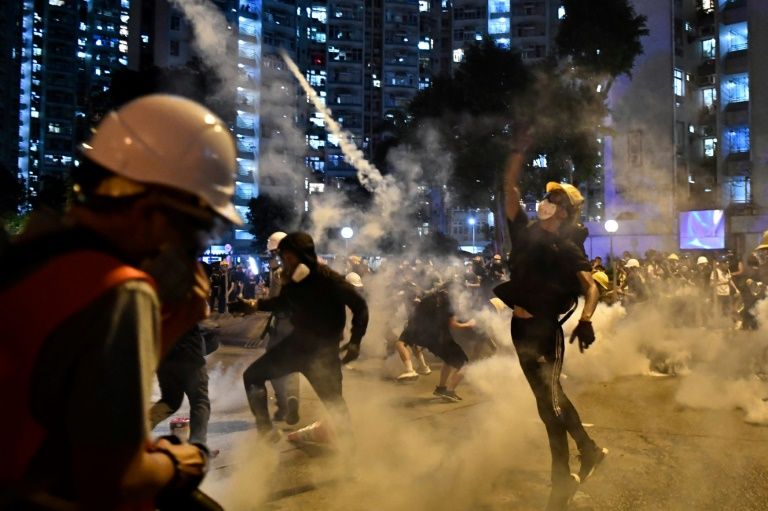 BEIJING: China warned Hong Kong’s pro-democracy protesters Tuesday that “those who play with fire will perish by it”, a day after the most widespread unrest of the two-month crisis.

In its harshest warning yet Beijing said the immense strength of the central government should not be underestimated as police in the semi-autonomous city announced they had arrested 148 people in connection with Monday’s violence.

The city has been plunged into chaos by weeks of protests triggered by opposition to a planned law that would have allowed extraditions to mainland China. The protests have since evolved into a wider movement for democratic reform and the protection of freedoms.

At a press briefing in Beijing, Yang Guang, spokesman for the Hong Kong and Macao Affairs Office of the State Council, said the “radical protests… have severely impacted Hong Kong’s prosperity and stability, pushing it into a dangerous abyss”.

Yang said the government still “firmly supports” both the Hong Kong police force — who have been criticised for their handling of the protests — and Carrie Lam, the city’s pro-Beijing leader who protesters want to resign.

“We would like to make it clear to the very small group of unscrupulous and violent criminals and the dirty forces behind them: Those who play with fire will perish by it,” Yang said.

“Don’t ever misjudge the situation and mistake our restraint for weakness… Don’t ever underestimate the firm resolve and immense strength of the central government.”

Hong Kong police said 148 people were arrested during running battles with protesters on Monday as the city buckled under a general strike followed by the most widespread and sustained clashes so far at more than a dozen locations.

Police stations were a particular target, with protesters hurling stones, eggs and bottles, and using giant improvised slingshots to catapult bricks over walls. An apartment complex that houses police officers and their families also came under attack.

– Concern in the capital –

Superintendent John Tse told reporters that police fired some 800 tear gas rounds — almost as many as the 1,000 rounds they said they had fired throughout the last two months.

In Beijing, the press conference held by China’s cabinet-level State Council was the second about the unrest in as many weeks, highlighting concern in the capital.

The clashes have piled pressure on Chinese President Xi Jinping, and led to speculation that Beijing might be forced to intervene in some capacity, even militarily.

Yang, however, seemed to downplay any idea of mainland police or military helping with law enforcement, saying the Hong Kong government was “fully capable of punishing the violent crime in accordance with the law, restore order to society, and restore stability to society”.

The protests on Monday paralysed the subway system during morning peak hour, led many shops to close and delayed scores of international flights.

In a press conference in Hong Kong, Lam warned the city was nearing a “very dangerous situation” as she framed the protests as a challenge to China’s sovereignty.

“I dare say they are trying to destroy Hong Kong,” said Lam.

The protesters have shown no sign of easing their campaign, however.

Three masked youngsters from the largely leaderless movement took the unusual step on Tuesday of holding a press conference to demand democracy, liberty and equality, and condemn the city’s pro-Beijing leaders.

Dressed in the movement’s signature yellow construction helmets and hiding their identities with face masks, the two young men and one woman billed their gathering as a civilian press conference “by the people, for the people”.

“We call on the government to return the power back to the people and to address the demands of Hong Kong citizens,” they said as they read out their statements in both English and Cantonese. – AFP