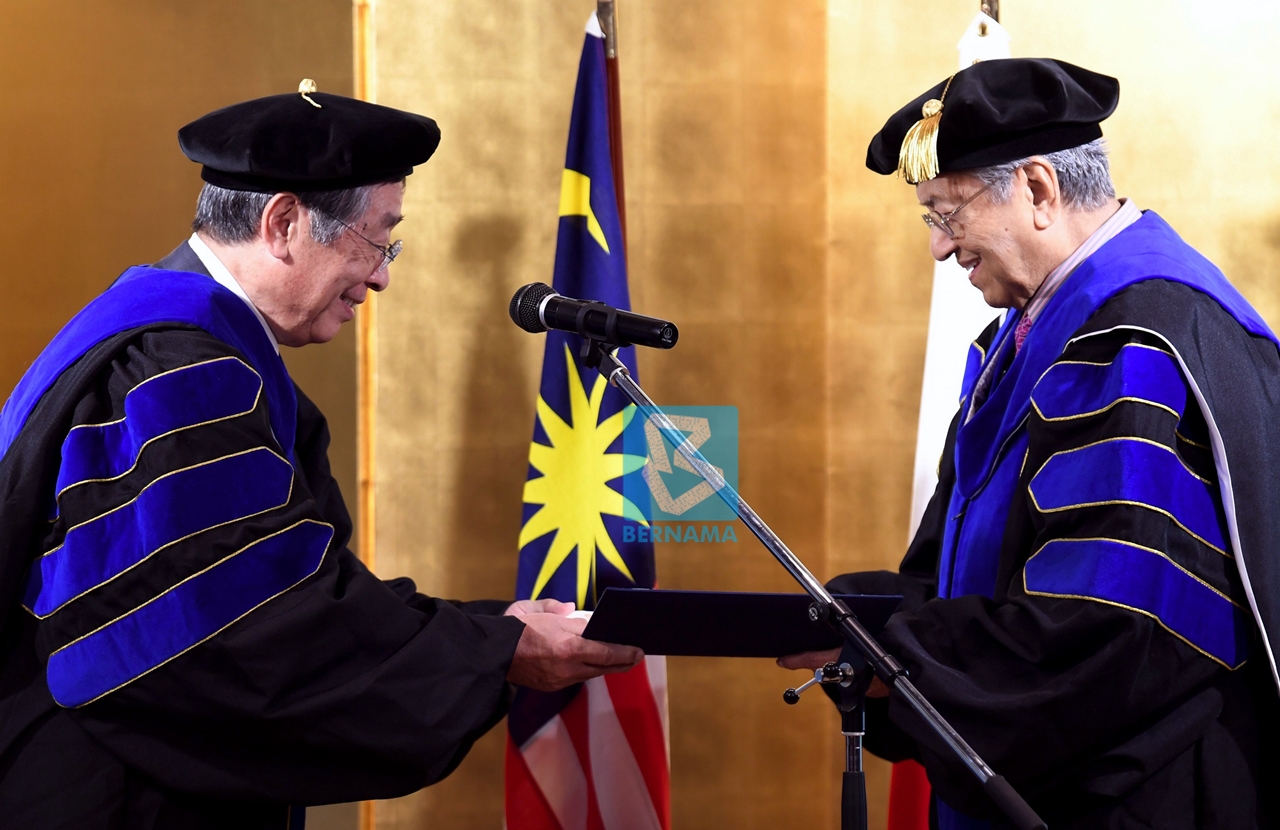 FUKUOKA, Japan: Malaysian Prime Minister Tun Dr Mahathir Mohamad on Wednesday was conferred an honorary doctorate by the International University of Japan (IUJ) in recognition of his outstanding contributions to Malaysia and Japan relationships.

Dr Mahathir received the Honorary Doctorate of Philosophy from IUJ president Hiroyuki Itami in a ceremony held at a hotel in Fukuoka City in the course of his two-day working visit to the prefecture.

At the ceremony, Itami emphasised that the Look East Policy, which was mooted by Dr Mahathir,  had a major impact on higher education in ASEAN countries.

“It is recognised and appreciated that many Malaysian young people who studied abroad in Japan have contributed to today’s development in Malaysia under this (Look East) policy,” he said, according to IUJ statement released in conjunction with the conferment.

Itami said the Look East Policy had served as the bedrock of the strong relationship between Malaysia and Japan.

Under the Look East Policy, the Malaysian government has sent hundreds of students and corporate trainees to Japan.

“Upon returning to Malaysia after graduating from universities or finishing their programmes at companies in Japan, these students have played an active and leading role in developing Malaysia and served as a bridge between Japan and Malaysia,” he said.

He said IUJ has taught more than 20 such Malaysian students sent by Malaysian government since the 1990s.

Itami said the IUJ had launched a programme called Japan-Global Development Program (JGDP) last year (2018) to offer learning opportunities to future top leaders from Japan, Asia, including Malaysia, Africa, and Latin America, about the Japanese experience of economic and societal development since the Meiji restoration and the logic behind this development.

Itami also expressed his hope that an even stronger bilateral relationship between Japan and Malaysia would grow under the Look East Policy in the new era.

“We believe that the International University of Japan will play an important role in Tun Mahathir’s Look East Policy, and in strengthening the relationship between Japan and Malaysia,” he said.

Dr Mahathir, in his acceptance speech, said he was merely carrying out the duties of a leader.

“Any leader, given the opportunity and power would do what I have done. Malaysia was a poor agricultural country, but because of the need to create jobs, we had to create infrastructure to facilitate that (demands).

“I am grateful for being recognised for doing something that is regarded as unusual (turning an agricultural country into an industrial nation), and for playing the role of a leader,” he said. – Bernama