Sunday, September 19
You are at:Home»News»‘Majority of youths happy with state administration’ 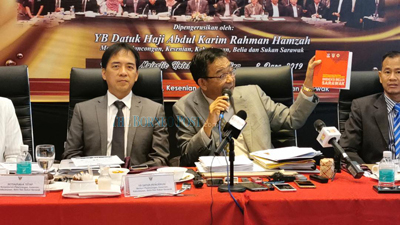 Abdul Karim right shows the the report of the Sarawak Youht Index survey at the press conference. At left is Hii. – Photo by Roystein Emor

Abd Karim (seated fourth right) with members of the Sarawak Youth Development Committee after the meeting. — Photo by Roystein Emor

KUCHING: The Sarawak Youth Index survey carried out by the Institut Penyelidikan Pembangunan Belia Malaysia (IYRES) shows that the majority of youths in Sarawak are happy with the present state administration.

One of the reasons, Minister of Tourism, Arts, Culture, Youth and Sports Datuk Abdul Karim Rahman Hamzah claimed, was that they were very passionate about the state’s rights.

He believed that this passion went across the board, be they Chinese, the Malays or Dayaks.

“Sarawakians in general are very passionate, and very sensitive about the rights of the state, and that is the reason why we have been putting a little bit of emphasis on our wealth, which we feel we have not been equitably rewarded,” he told reporters after chairing the Sarawak Youth Development Committee meeting here yesterday.

Abdul Karim said the survey, which was conducted before the last parliamentary election and ended in January this year, covered all the 40 districts, involving more than 13,000 youths aged 15 to 30 years old.

Sarawak, he added, was the third state to have done the survey; the first one Sabah and the second one Johor.

He said it was more toward how the state government is going to chart its policies, improve on what it should be doing for the youths. The political domain was just a small portion of the survey.

“I am not sure if the other two states included that (political) domain. This domain (non-political) was requested by my ministry at that time, before the last general election.

Abdul Karim said as whole it was a very interesting survey.

The (IYRES) team had gone down to the ground, doing the survey and sampling the well-being of the youths,  their aspiration, and interest, to name a few.

Abd Karim said he could not reveal the full detail of the survey findings until it is tabled in the Sarawak cabinet, but he found the survey very important for his ministry to chart its policy for the youths.

“After it has been tabled, we will have a specific date for the launching. I wish to sit with them before it is tabled because the content is very detailed, from the youth aspiration to politics,” he said.

Previous ArticleMawan: SDNU to team up with KPUC on graveyard squatters issue
Next Article No more foreign workers for service sub-sectors by 2021