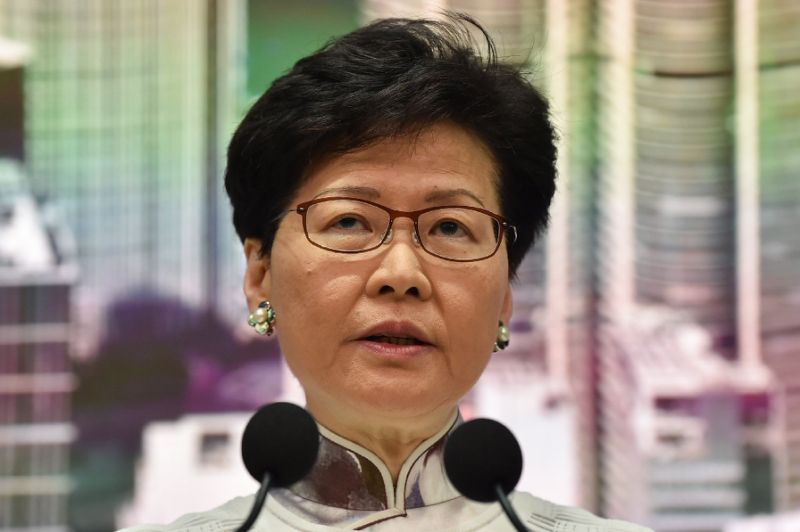 The embattled leader met with business leaders as thousands of pro-democracy activists staged a sit-in at Hong Kong airport, hoping to win international support for their movement.

Lam, whose support for a bill to allow extradition to mainland China sparked the crisis, warned that the economic impact of the unrest threatened to be worse than the 2003 SARS outbreak or the 2008 financial crisis in the financial hub.

“Compared to the economic downturn caused by SARS that we handled previously, even to the (2008) economic crisis, the situation this time is more severe,” she said at an abruptly organised press conference.

“In other words, the economic recovery will take a very long time.”

The private sector and the tourism industry in particular have raised concerns about the economic impact of the ongoing protests on the city, with travel agencies reporting drops of up to 50 per cent in group tour bookings and the tourism board warning of double-digit declines in visitor arrivals in the second half of July.

Hong Kong carrier Cathay Pacific has also warned that inbound bookings are down.

The protests began two months ago over the controversial extradition Bill but have morphed into a broader movement demanding democratic reforms.

Lam has refused to cave in to the demands, which include a call for the direct election of the city’s chief executive, currently chosen by Beijing.

“As far as political solution is concerned, I don’t think we should just sort of make concessions in order to silence the violent protesters,” she said.

“LET THEM KNOW THE TRUTH”

On Friday, activists staged a sit-in at Hong Kong airport’s arrivals hall and held up signs in Chinese and English condemning police violence.

“No rioters, only tyranny,” the demonstrators chanted as they began a three-day action.

“Save Hong Kong from tyranny and police brutality!” read one sign.

Protesters have staged increasingly inventive rallies across Hong Kong, and brought out supporters ranging from families to lawyers in a bid to show the broad backing for their demands.

But the demonstrations have also increasingly descended into violence, with police firing tear gas and rubber bullets and protesters hurling bricks and bottles.

The airport sit-in is the second time the demonstrators have brought their message to the busy travel hub, hoping to garner support from international arrivals.

“Ask me about Hong Kong” read signs in different languages attached to the sleeves of some of the protesters.

“We want to tell the passengers what’s happening in Hong Kong,” said Charlotte Au, a 16-year-old student among the protesters.

Some passengers arriving at the airport stopped to take photos or look at leaflets being handed out by the demonstrators. Others offered protesters a thumbs-up.

Clara Boudehen, visiting from France, said she was “very impressed” by the rally.

Monica Yoon Hee Jung, who had just arrived from Korea, said she had been slightly nervous about her trip.

“When I see the rally here, it is really peaceful. They are not aggressive at all. I feel they are trying to show their real heart. Very genuine,” she said.

Further protests are planned across Hong Kong over the weekend, with fears that new confrontations between police and demonstrators are possible. Hundreds of people have already been arrested in the unrest.

The weeks of demonstrations pose the biggest threat to Beijing’s authority since Hong Kong’s handover from Britain in 1997.

In the evening, protesters gathered in the Wong Tai Sin neighbourhood, where police earlier this week fired tear gas at protesters for a subversive play on a Chinese festival where offerings are burned to appease the spirits of the dead.

Around 100 protesters gathered to burn paper money featuring caricatures of Lam and emblazoned with the logo “Hell Bank Note” as others looked on.

Police watched the protesters from a distance, ignoring as activists shouted insults and pointed lasers at a paper effigy of Lam while chanting “set it on fire”. – AFP