Thursday, August 6
You are at:Home»News»Sabah»Sabah-M’sia, Indonesia govts to ink MoU on Rhino conservation 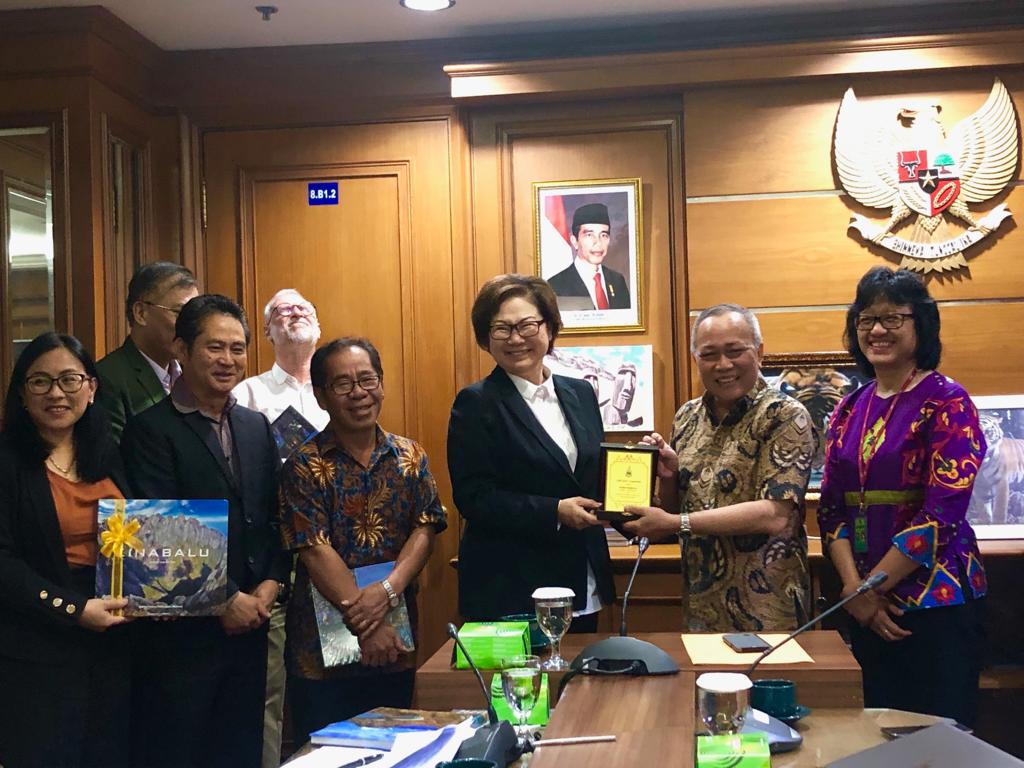 Liew (centre) presenting a proboscis monkey toy to Wiratno during the exchange of mementos.

JAKARTA: The governments of Indonesia and Sabah-Malaysia have agreed to sign a Memorandum of Understanding (MoU) on Conservation of the Sumatran Rhinoceros (Dicerorhinus sumatrensis) in Indonesia next month (September).

The move, which involves a captive breeding programme, is to prevent the extinction of the species in Sabah, given that Iman, kept at the Borneo Rhino Sanctuary in the Tabin Wildlife Reserve, Lahad Datu, is Malaysia’s sole surviving female rhino at the moment.

The agreement was reached at a meeting between Sabah Deputy Chief Minister Datuk Christina Liew, and Director-General Wiratno of the Directorate General of Natural Resources and Ecosystem Conservation under the Ministry of Environment and Forestry at the Ministry’s Office, here, yesterday.

Both expressed their commitment towards conservation of the Sumatran Rhinoceros and agreed that political will is crucial to the signing of the MoU, recognising that the rhino is one of the world’s most endangered species.

Liew, who is also Sabah Minister of Tourism, Culture and Environment, and Wiratno agreed on the need to sort out the administrative part to speed up the inking of the MoU. 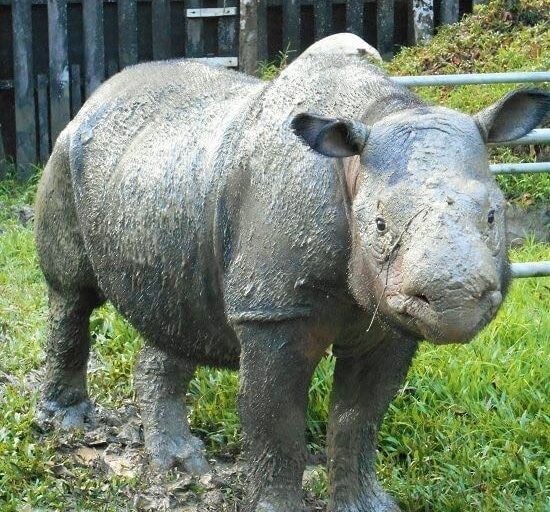 “I promise to work towards the signing of the MoU in September this year. We will do our best. We cannot allow administrative issues to sacrifice the survival of the Sumatran Rhinoceros,” said Wiratno, who suggested that the signing ceremony be held at the Sumatran Rhino Sanctuary in Way Kambas National Park in Indonesia.

Liew said, she will brief Chief Minister Datuk Seri Mohd Shafie Apdal and the State Government on the outcome of the meeting.

“The Sabah Wildlife Department will iron out any administrative issues relating to the provisions in the MoU. In this respect, I will let the Chief Minister take up the matter with the relevant authorities in Malaysia,” she said, in response to the Director of Biodiversity Conservation, Indra Exploitasia Semiawan, who emphasised on the need to expedite the administrative process.

The Minister thanked Vice-Consul of the Consulate-General of the Republic of Indonesia in Kota Kinabalu, Sartono Hendrarso and Consul Cahyono Rustam for coordinating the meeting.

Input was provided by Wildlife Adviser to the Minister, Dr. John Payne, Augustine and WWF-Malaysia conservation director, Henry Chan, who expressed support for Iman’s IVF participation under the captive breeding programme in Indonesia.

In vitro fertilisation (IVF) involves the extraction of an egg from Iman and getting it fertilized in a specialist lab, using sperm from one of Indonesia’s captive male rhinos, before implanting the embryo (fertilized egg) in the womb of a surrogate female rhino. Indonesia is home to an estimated 30 to 50 Sumatran rhinos.

“This is the very first attempt at IVF using eggs from an aging and sick female (Iman) with the sperm of an aging and fit male (Andalas from Indonesia). What we are optimistic is the beginning of a process of refining techniques and protocols with a goal of success after several attempts,” Dr. Payne said.

Meanwhile, executive director of the Indonesian Rhino Foundation, Widodo Ramono, assured that his team will collaborate with Sabah Wildlife Department on the IVF procedure. The department will enlist the help of the Leibniz Institute for Zoo and Wildlife Research in Berlin for the collection of eggs from Iman.

Iman remains as Malaysia’s sole surviving female Sumatran rhino following the death of then Malaysia’s sole surviving male Sumatran rhino, Tam, on May 29 this year due to old age and multiple organ failures stemming from kidney and liver damage. Iman, who was captured in 2014, has been kept at the Borneo Rhino Sanctuary in Tabin Wildlife Reserve since then. However, the female rhino has been diagnosed as having cysts and fibroids in her uterus (womb) thus rendering her infertile.

Tam, a 30 to 35-year-old rhino, was captured near an oil-palm plantation in 2008 and translocated to the Borneo Rhino Sanctuary in Tabin Wildlife Reserve in Lahad Datu. Attempts were made to mate Tam with Puntung (a female rhino captured in 2011) and Iman (captured in 2014) under a captive breeding programme but these failed to produce viable pregnancies.

Puntung, then 25 years old, was reported to have reproductive problems with cysts in the lining of her womb. She was euthanised (put to sleep after her battle against skin cancer) in June 2017.

The Bornean sub-species of the Sumatran rhinoceros, which is only found in Sabah, is the rarest of all rhinos, distinguished from other Sumatran rhinos by its relatively small size, small teeth and distinctive shaped head. It stands about 120 to 135cm at the shoulder and weighs not more than 700kgs.

Prior to this trip, a meeting involving four parties was convened to discuss the implementation of the provisions of the Draft Memorandum on Conservation of the Sumatran Rhino at the Ministry of Tourism, Culture and Environment. Liew chaired the meeting attended by the Ministry, Consul-General of the Republic of Indonesia in Kota Kinabalu, Borneo Rhino Alliance (BORA) and World Wide Fund for Nature-Malaysia (WWF-Malaysia).

The meeting also deliberated on the Implementation Arrangement between the Ministry of Environment and Forestry of the Republic of Indonesia and the Ministry of Water, Land and Natural Resources of Malaysia concerning the Collaborative Programme on the Application of Assisted Reproductive Technology (ART) in the Sumatran Rhinoceros.

In the Sabah context, it was reported that the harvesting of rhino horn by native hunters was encouraged in bygone days. By the 1960s, the rhinos had largely disappeared from western and northern Sabah, and became confined to the forests in the southeastern areas (that is, Tabin Wildlife Reserve and the forest reserve in Ulu Segama, Kuamut).

By the late 1970s, it was feared that the rhino was nearing extinction in Sabah. However, a statewide faunal survey from 1979 to 1982 revealed that some small breeding populations (in the wild) still existed at the Tabin Wildlife Reserve and Danum Valley Conservation Area.

In early 2007, WWF Malaysia announced that it had captured video footage of the extremely rare Bornean sub-species of the critically endangered Sumatran rhino. The footage was taken in a forest in Sabah. It was the first sighting of a male rhino in its natural habitat.

By 2003, the Sumatran rhino had become extinct in Peninsular Malaysia (which was seriously hit by poaching) when all five rhinos at the Rhino Conservation Centre in Selangor died due to an infection.

In Sabah, alarm bells sounded on the Sumatran rhino to the point of near extinction as far back as 2002, despite conservation efforts made by the Government. Numbers continued to decline due to poaching being the major threat. The mammal was ruthlessly pursued for its horn (said to have medicinal value) and other body parts. Other contributory factors were logging activities causing loss and fragmentation of the rhino’s natural habitat.