Tuesday, December 1
You are at:Home»World»Trump says US ‘not ready’ to make trade deal with China 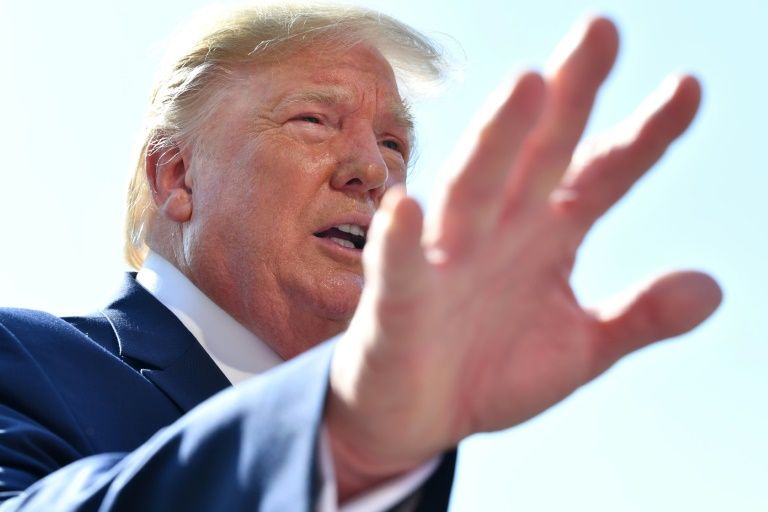 US President Donald Trump gestures as he speaks to the press on the South Lawn of the White House before departing in Washington, DC on Aug 9, 2019. AFP Photo

President Donald Trump said Friday he was not ready to finalize a trade deal with Beijing and signaled he might cancel talks set for September, raising the stakes in the intensifying US-China trade war.

“We’ll see whether or not we keep our meeting in September,” Trump told reporters at the White House before heading out on vacation at his New Jersey golf resort.

Relations have soured further in the past week after Trump announced a new round of punitive tariffs on Chinese goods, despite a truce agreed with President Xi Jinping, and Beijing responded by halting all purchases of US agricultural goods.

The US Treasury then declared China a currency manipulator, after the yuan lost value in the face of the new round of tariffs due to take effect September 1.

“We’re not ready to make a deal but we’ll see what happens,” Trump said. “We have all the cards. We’re doing well.”

US and Chinese negotiators met in Shanghai in late July for the first time since talks collapsed in May, and were due to hold another round in September.

“Whether or not they’re canceled, we’ll see,” Trump said.

The countries have imposed tariffs on $360 billion in two-way trade and with the new round Trump announced, all Chinese goods would be subject to punishing duties.

Trump on Thursday lamented the strength of the US dollar which puts American manufacturers at a disadvantage, and once again demanded the Federal Reserve lower interest rates to counteract that.

His latest comments continued the relentless campaign against the US central bank, but backed away from calls for a weaker exchange rate for the dollar.

“No I wouldn’t do that,” Trump said when asked if he wanted to devalue the dollar.

However, “If the Federal Reserve would bring down interest rates over a period of time, I would love to see a point or a little more than that.”

The Fed raised the benchmark US interest rate four times last year, a total of a full percentage point, but pulled back with a rate cut last week. – AFP

Previous ArticleUnemployment rate in second quarter of 2019 unchanged at 3.3 per cent
Next Article Hong Kong leader rules out concessions, warns of economic downturn