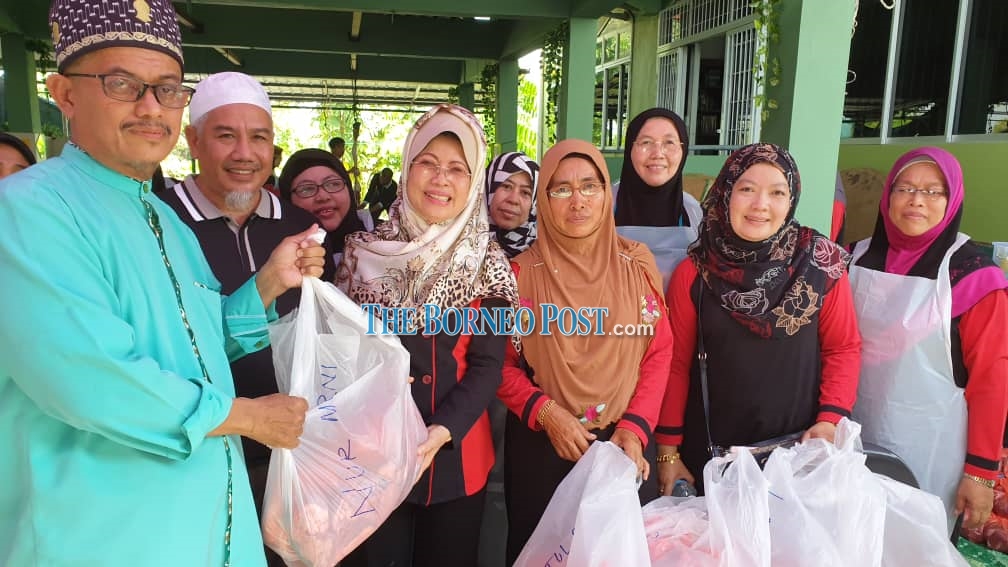 Fatimah (third left) seen handing over sacrificial meat to one of the recipients who were present during the event.

KUCHING: The Sarawak government will continue to assist the families of missing Sarawakian soldiers Corporal David Edmund Rapi and Lance Corporal Moses Logers, who have been reported missing since July 19.

According to Minister of Welfare, Community Well Being, Women, Family and Childhood Development Dato Sri Fatimah Abdullah, this was despite Works Minister Baru Bian’s recent statement that his ministry was assisting the families of the two soldiers.

Fatimah opined that it did not matter who is helping the families as the two soldiers are Sarawakians.

“One of the soldiers (David) happens to be from my area, Dalat, and his family has contacted me for assistance.

“One of the things that we (state government) is doing to help them is to provide transportation and accommodation for the families in Peninsular Malaysia if they are going there for matters regarding the two soldiers,” she said when met after distributing sacrificial meat in conjunction with Hari Raya Aidiladha at Surau Darul Mualimin, Taman Desa Guru, Samariang today.

She also revealed that the state government would arrange for flights to enable the family members of the two soldiers to travel to Peninsular Malaysia.

As for now, Fatimah said that the families of the two soldiers intended to take their (soldiers’) belongings back home for now.

“They (family members of the two soldiers) did mentioned that they want to be involved in the search and rescue operation for the two soldiers or at least a briefing by the Ministry of Defence on the current situation or updates regarding the disappearance of David and Moses. We (state government) also hope that they will be given updates on the situation as well,” she said.

Moses and David were reported missing after they failed to be present during a roll call on the night of July 19 and is was reported that all their personal belongings were still left in the room except for their hand phones.

Last week, Fatimah also said that the state government would fly the family members to Langkawi after getting the green light from the Defence Ministry.

On July 29, Defence Minister Mohamad Sabu said that efforts to find the members of the armed forces by the three military branches had been halted on July 26, as no new leads were discovered.

In a statement issued Tuesday, the Malaysian Armed Forces (ATM) said that Royal Malaysian Navy (TLDM) vessels were still in the vicinity around Pulau Perak in Kedah to carry out maritime patrols and have been instructed to report immediately if they find any new leads.

It also said that a Royal Malaysian Air Force (TUDM) helicopter is standing by at Butterworth Air Base should they receive any new information.