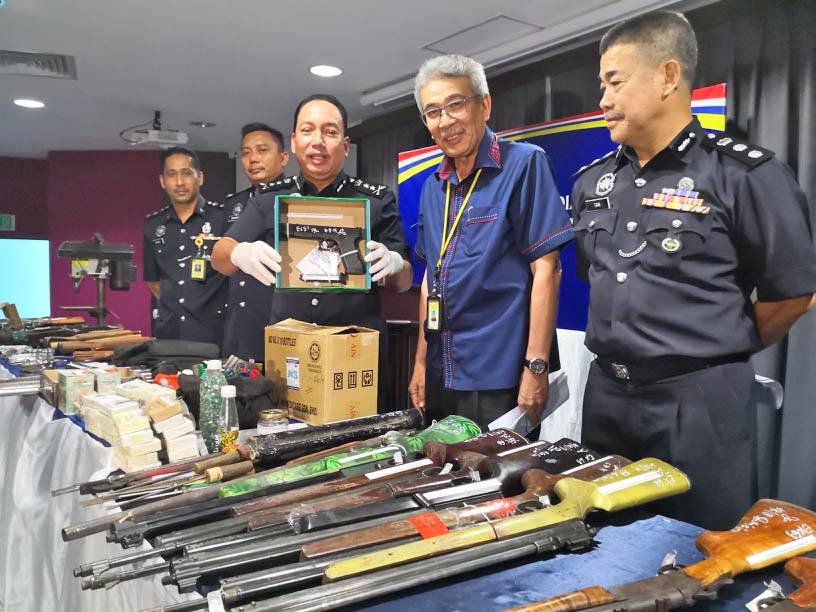 KOTA KINABALU: Police have made one of their biggest seizures of homemade guns, known locally as bakakuk and imitation pistols, airguns, pellets and bullet shells during a two-day raid in Ranau early this month.

Sabah Deputy Police Commissioner Datuk Zaini Jass said eight men, between 30 and 80 years old, were detained during the raids conducted on August 6 and 7.

“A team of D9 police from the State Police Contingent (IPK), Special Branch and Ranau police made the first raid on a house in Kampung Kinaratuan, Ranau.

“In this raid, police found four homemade shotguns, an airgun and an imitation pistol, 1,225 pellets and 256 bullet shells in two bedrooms, one on the ground floor and one on the upper floor.

“Police also detained two men, including a 42-year-old, whom we believe is the gunsmith,” he told a press conference at the State Police Headquarters in Kepayan yesterday.

Zaini added that further investigation then led police to a storeroom located outside the house where more bakakuk, pellets and bullet shells were seized.

“Police investigation did not stop there and the following day (August 7) police detained two more suspects, including an army personnel at the Lok Kawi Camp,” said Zaini.

Zaini said police investigation revealed that one of the suspects, a gunsmith, had been active in making and repairing homemade guns for the past 25 years.

“The suspect claimed to have sold more than 150 homemade guns for between RM800 and RM2,800 each, depending on the design and quality of the weapon.

“The suspect said he had also made and sold four imitation pistols and four revolvers for RM2,000 to RM2,500 each,” said Zaini, adding that most of the suspects who were detained were either sellers or buyers.

The case is now being investigated under Section 7 of the Firearms (Increased Penalties) Act 1971, which carries the death penalty or life imprisonment.

Police believe more raids will be carried out soon and Zaini urged anyone who might be in possession of imitation shotguns or bakakuk to immediately surrender the weapon to the police or face stern action.