Saturday, January 18
You are at:Home»World»Knife-wielding man goes on Sydney rampage, one dead 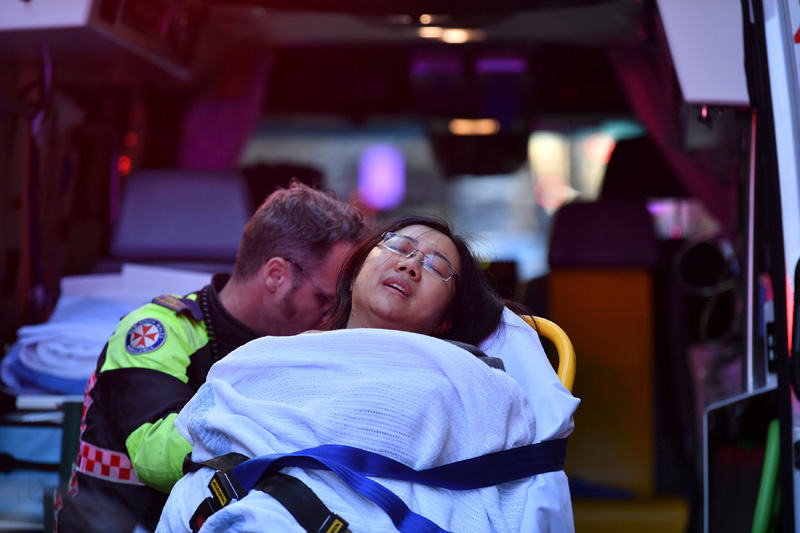 The injured woman is taken by ambulance, as police officers investigate the crime scene. — Reuters photo

SYDNEY: A man went on a stabbing rampage in downtown Sydney yesterday, killing one woman and wounding another before he was restrained by members of the public, police said, adding they were not treating it as a terrorist incident.

The 21-year-old man, who police did not name, was carrying a knife and a computer thumb drive containing information about deadly attacks in North America and New Zealand, police said.

But he did not appear to be acting for any terrorist groups and the attack was not being treated as terrorism, police added.

“At the end of the day, it’s a horrendous crime and he should pay for that,” New South Wales state police commissioner Mick Fuller told reporters.

A 21-year-old woman was found dead in an apartment building and a second woman, 41, was taken to hospital with a stab wound to her back. She was in stable condition, police said.

They did not say how the first woman died but said the man was responsible for both attacks. There was no apparent link between the two women.

Police were investigating a home about 32 km west of the city where the young man lived with his parents.

The man was in custody and expected to be charged with homicide, assault and, depending on the outcome of the investigation, potential terrorism offences, Fuller said.

The incident brought downtown traffic to a halt in Australia’s biggest city. Video images on Twitter showed a young man running across an intersection and jumping onto a car hood, yelling and waving what appeared to be a long-bladed knife.

The man fell to the ground when the car moved and he was confronted by a person holding a chair, the video showed. It was unclear what the man was shouting.

Other footage showed the man pinned to the ground by several people holding two chairs and a milk crate on top of him.

“The attacker is now in police custody following the brave actions of those who were present at the scene and were able to … restrain him,” he said.

A woman who answered the telephone at a Subway sandwich shop near the scene told Reuters, “We saw the person with a knife over there bleeding.

“The cops are here and they blocked the road right now, so we can’t go outside. They said, ‘It’s a crime scene, you can’t come out,’” said the woman, who declined to give her name.

This is how Sydneysiders respond,” he said. “If you want to behave in this sort of manner, if you want to put life and property at risk, it’s not just the police who will respond.” – Reuters