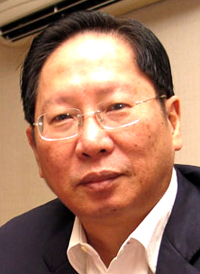 SIBU: Former Dong Zong chief Temenggong Dato Vincent Lau says it was not right to brand the United Chinese School Committees Association of Malaysia (Don Zong) as racist for objecting to the inclusion of the learning of khat or Jawi calligraphy  in the Bahasa Malaysia syllabus for  Chinese primary schools.

When contacted yesterday, he said the allegation by Prime Minister Tun Dr. Mahathir Mohamad was serious and wrong.

“If one takes this objection as being ‘racist’, it will create racial tension. We should avoid making such comment.”

On Monday Dr Mahathir in a news report by Bernama described Dong Zong as racist, saying “It has never agreed with national education policies, including the introduction of Jawi calligraphy in schools.”

The prime minister added that Dong Zong had also protested against the setting up of a Vision School (Sekolah Wawasan) for fear of Chinese students mixing with other races.

When interviewed in Langkawi on Monday, Dr Mahathir was reported as saying, “Dong Zong is racist; we set up a campus in Vision School to put a Sekolah Jenis Kebangsaan (SJK) Cina, a SJK Tamil and a ‘sekolah kebangsaan’ (national school) in one campus, they were against it.

“They are afraid to let their children mix with Malays, so they did not want it. They are against all, never agreed with anything.”

Dr Mahathir was asked to comment on Dong Zong’s move to organise a petition to protest the learning of Jawi calligraphy in vernacular schools.

The prime minister said the decision to introduce khat was made in 2012 by the Barisan Nasional government, but the Chinese pressure group did not raise its objection at
that time.

Lau, in his response yesterday, said: “When people object to an issue, they can voice it out and raise objection.

“Tun Dr Mahathir has made a serious allegation against Dong Zong, and this is unfair to the Chinese community.

“Its key role is to promote and develop Chinese education in Malaysia through the 60 Chinese private secondary schools in Malaysia out of which 23 are in Sarawak and Sabah,” he said.

“For Dong Zong, there are reasons for them to object to the inclusion of the script learning in Chinese vernacular schools.”

“Although the government has said the learning is not forced upon, who can guarantee students would not have to sit for it in an examination in future?”Lau added.

He added it is not wrong for someone to opt to learn khat but it should not be made compulsory.