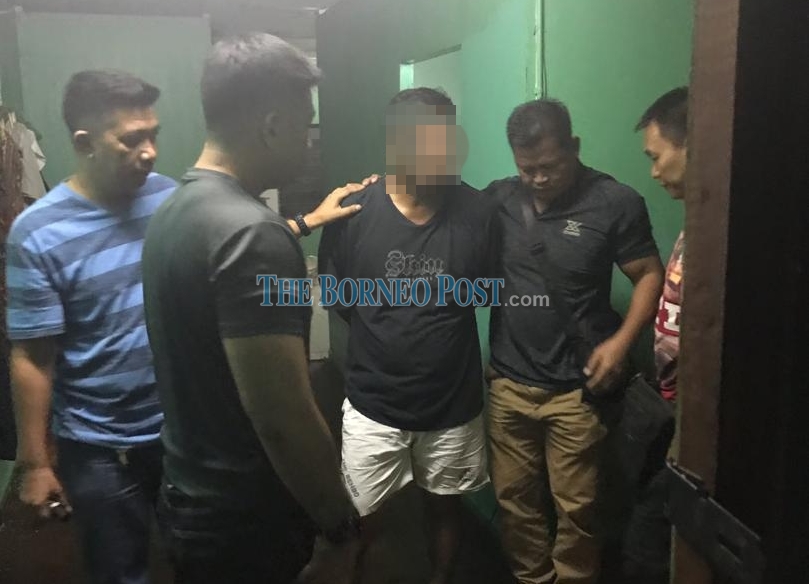 The suspect (third right) was arrested by the police at his house last night.

KUCHING: A 37-year-old man has been arrested by the police for allegedly molesting and raping his seven-year-old niece on two separate occasions.

The suspect was arrested at his house at around 7pm last night and will be investigated under Section 376 of the Penal Code for rape and Section 14(a) of the Sexual Offences Against Children Act 2017 for touching any part of the body of a child for sexual purposes.

“The first incident took place on Aug 12 at Ranchan pool where the suspect is believed to have molested the victim while they were bathing in the river,” said Serian District police chief DSP Aswandy Anis in a statement.

He added that only two of them were at the picnic spot, without the presence of any other family members.

The second incident took place on Aug 13 when the suspect was tasked to babysit the victim at his house.

“On that day, the victim’s father was at the Sarawak General Hospital, to look after her younger sibling who was being treated there while the mother was busy selling vegetables at the Serian market,” said Aswandy.

The suspect allegedly lured the victim into his bedroom and raped her when they were alone.

Aswandy did not reveal as to how the victim’s parents found out about the heinous acts.

A police report was only received by the police yesterday (Aug 13) which then led to the arrest of the suspect on the same day.

The victim, who is still in primary school, was also sent for a medical check-up.

Previous ArticleILP Miri’s air quality continues to be hazardous with API of 363
Next Article Sri Aman air ‘very unhealthy’, API readings above 200 since 3am