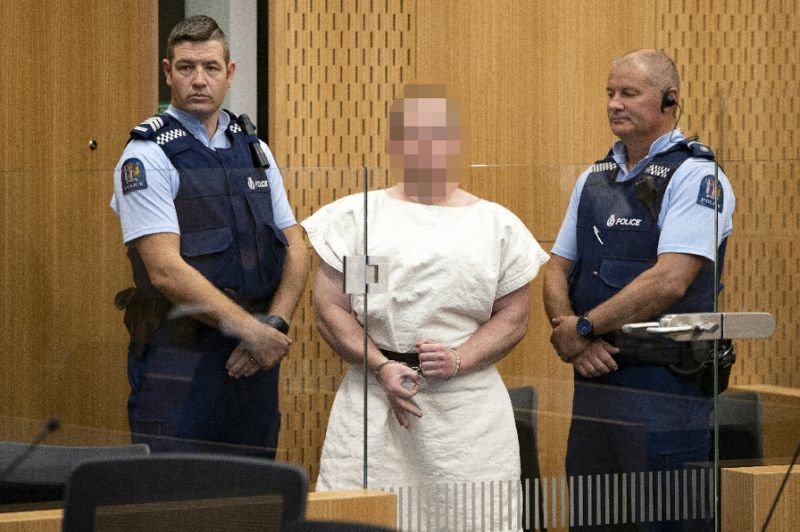 Brenton Tarrant, the man accused of carrying out the Christchurch massacre, appears in court the day after the mass killing. AFP Photo

WELLINGTON: Officials in New Zealand apologised Thursday after the alleged Christchurch mosque gunman was allowed to send a letter from prison espousing “hateful” views that a supporter then shared online.

Australian Brenton Tarrant is in a maximum-security jail in Auckland awaiting trial for the murder of 51 Muslim worshippers on March 15 in the worst mass shooting in modern New Zealand history.

Yet despite the government vowing to deny Tarrant a platform to disseminate hate speech, corrections officials revealed he had been allowed to send mail from his prison cell.

One of the letters from the self-avowed white supremacist, addressed to a Russian man named Alan, was posted to the website 4Chan.

Handwritten in block letters, the six-page note discusses a trip Tarrant made to Russia in 2015, his admiration for British fascist Oswald Mosley and his belief “there is a great conflict on the horizon”.

Prime Minister Jacinda Ardern, who has vowed never to mention Tarrant by name, was furious the letter had bypassed the correction department’s vetting system.

“Corrections themselves have acknowledged the failing here… this individual should not be able to share his hateful message from behind prison doors,” she told reporters in Tuvalu, where she is attending a regional summit.

“I would like to apologise for the distress that this has caused to those impacted by the tragic events of 15 March,” she said.

Stevenson said Tarrant’s mail privileges had been suspended while screening processes were reviewed.

“It is a fine balance to uphold our lawful obligations and mitigate all potential risks posed by the prisoner,” she said.

“However, we are absolutely committed to ensuring that he has no opportunity to cause harm or distress, either directly or indirectly.”

Corrections Minister Kelvin Davis said that before the mail ban, Tarrant had sent nine letters while in custody: two to his mother and seven to “associates”, two of which were stopped by officials.

Davis said managing the 28-year-old was a challenge for the prison system.

“The thing is, we’ve never dealt with a prisoner like this before,” he told Radio New Zealand.

“I’ve asked whether our laws are actually fit for purpose. I’ve asked corrections for advice on where they think we need to make changes.”

Tarrant allegedly opened fire in the packed Al Noor mosque during Friday prayers on March 15, and then travelled across town to continue the carnage in the suburban Linwood mosque, while livestreaming his actions on social media.

He is scheduled to stand trial in May next year on 51 counts of murder, 40 of attempted murder and engaging in a terrorist act.

His case came before the Christchurch High Court on Thursday for a brief hearing on procedural matters, although Tarrant was not required to appear via audio-visual link, as he has previously.

The case was adjourned until October 3, when the court is expected to make a decision on whether to move the trial away from Christchurch. – AFP