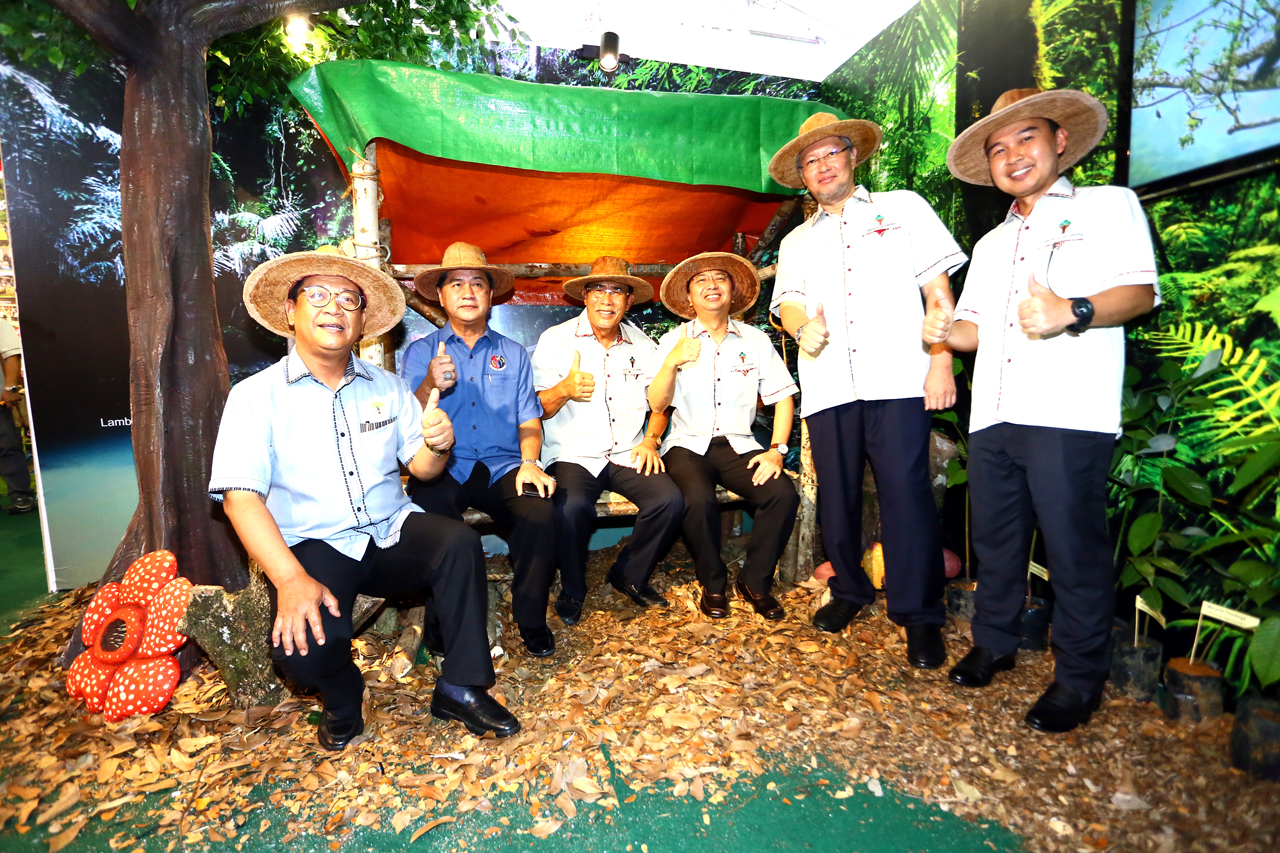 Hamden (third right) gives the thumbs up together with Len Talif (third left), Wan Lizozman (second right), Razaili (second left) and others as they pose at a photo-op spot at the carnival. — Photo by Muhammad Rais Sanusi

KUCHING: Research and product development on non-timber forest products (NTFP) should be intensified and expanded to ensure that NTFP in Sarawak possess high quality and commercial value to meet the needs and demands in the local and international markets.

This was stated by Sarawak Forest Department (SFD) director Hamden Mohammad, who said these efforts can only be successfully implemented through the support of and collaboration with multiple stakeholders to ensure sustainable development for a better future of NTFP in Sarawak.

“SFD is also actively implementing various activities for the NTFP Development Programme such as workshops, technical training, courses and study tours to enhance knowledge and skills of the community in NTFP-making, as well as to expose them to new ideas, creativity and diversity in the production of NTFP,” he said at the opening ceremony of the NTFP Carnival Sarawak 2019 at Kuching Waterfront yesterday.

He shared that workshops and training sessions on making handicrafts from NTFPs such as rattan, bemban, pinang puteri or laka, herbs and spices such as cinnamon, cardamom, star anise and others were carried out by the department since 2009 in collaboration with various agencies such as the Attitude Planet Art from Selangor and Malaysian Handicraft Development Corporation.

It also carried training on ‘gaharu’ inoculation with engagement of local communities in Ulu Mujok, Sarikei in collaboration with the International Tropical Timber Organisation, Indonesia. On the NTFP Carnival, Hamden said it has become an annual event of SFD since its inception in 2016 with the aim of promoting market and expanding business networks for NTFP produced by the local communities.

“Compared to the last three years, this year’s carnival is organised on a larger scale and longer duration, which is seven days compared to five days previously.

He said the participation from international agencies such as Ministry of Environment and Forestry Republic of Indonesia, NTFP-Exchange Programme Indonesia, The Centre for People and Forests Nepal, Laos Disable Women’s Development Centre, Reakossa Arts, Cambodia and the Philippines can also serve as one of the best ways in advancing partnership and expanding networks in order to introduce, promote and widen the markets of the state’s NTFP.

“The carnival has also opened up the opportunity for the local communities to share knowledge and experiences as well as to gain some fresh, new ideas on NTFP-making from other participants to ensure the sustainability of NTFP,” he added.