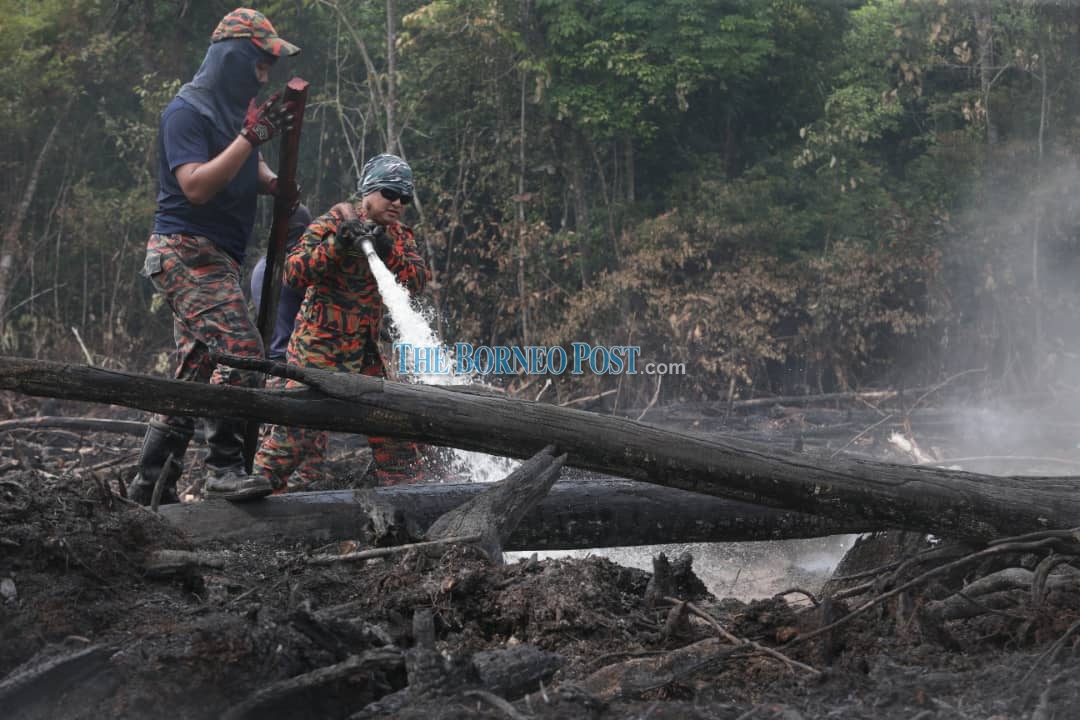 Bomba personnel are working around the clock to help extinguish the fires.

KUCHING: The efforts by the Fire and Rescue Department (Bomba) to control peat fires in Kampung Sedi Pulau Bruit, Tanjung Manis. has been further aggravated by what it termed as ‘sabotage’ attempts by irresponsible individuals.

Bomba Sarawak Assistant Director of Operations Tiong Ling Hii revealed that when firefighters were working in the area at around 1am today, they found elements to suggest that the fire was deliberately started.

He explained that these irresponsible individuals were believed to have intentionally set fire to two wooden houses in the area, causing the fire to spread rapidly and causing it to become even more difficult to get under control.

“The fire became larger and it was risky for our personnel to extinguish. We had to look hard for other accessible means to stop the fire from spreading to residential homes,” he said in statement today.

He added that Bomba personnel and the villagers also tried to capture the suspects involved, but failed.

“The change in wind direction resulted in fires spreading to the nearby oil palm factory. The lack of other access and the dark surroundings made our task more difficult.

“Efforts are still being undertaken by firefighters to prevent and control forest fires from spreading to oil palm plantations,” he said.

It is also understood that land ownership rights issues could be the reason behind the sabotage attempt.

Meanwhile, Assistant Minister of Corporate Affairs Abdullah Saidol expressed regret over the incident and called on Bomba and the village chief to report the matter to the police.

Abdullah, who is also Semop assemblyman, said such an attempt at sabotage could be considered a serious crime,

“Rela personnel can also help by patrolling the area. I have also allocated funds to the village committee so that they can prepare food and refreshments for those involved in firefighting,” said Abdullah, who was in Daro when contacted.