Saturday, January 18
You are at:Home»News»Nation»76 detained for using fake ICs, ICs belonging to others 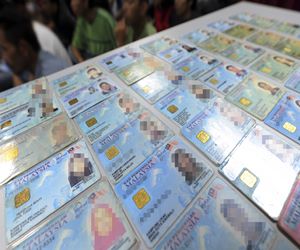 KUALA LUMPUR: A total of 76 individuals were arrested this year for possessing fake identity cards (IC) or were in possession of ICs belonging to others, said National Registration Department (NRD) director-general Datuk Ruslin Jusoh.

He said the arrests were made during several joint operations carried out with the Royal Malaysia Police and the Immigration Department.

He said the NRD would ensure that the documents carried by Malaysians were valid and issued by the department.

“Fake ICs are of very low quality and can be easily detected. We have a ‘card reader’ to verify the contents of the card,” he said in the Ruang Bicara programme, produced by the Bernama News Channel here last night.

Commenting on the amendments to the Federal Constitution to lower the voting age to 18 and be automatically registered as voters, Ruslin said the NRP was ready to assist the Election Commission (EC) to carry out the registration process.

He said the NRD would share its available data with EC and this would be carried out through discussions between the two parties to facilitate the EC’s access to the data, he said. – Bernama