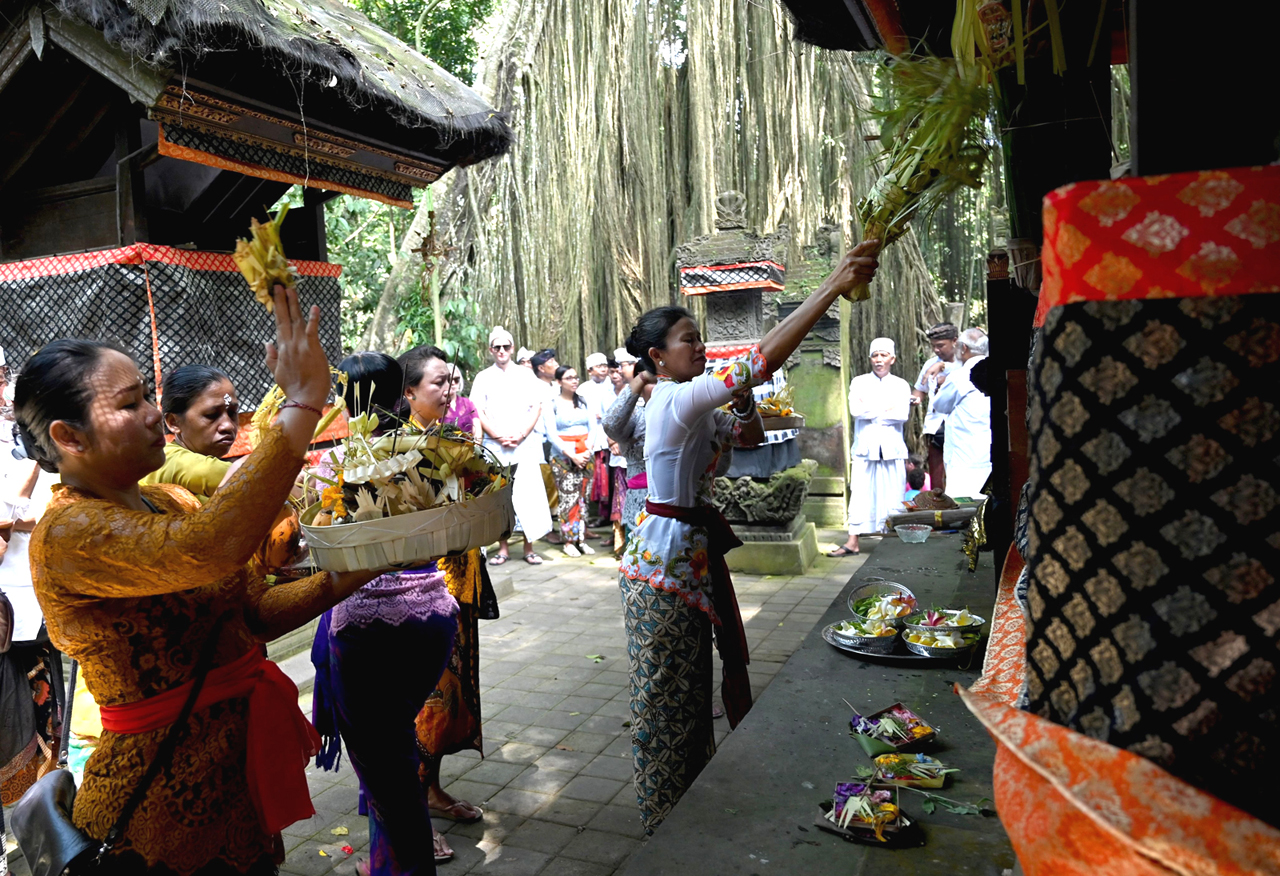 Balinese take part in a purification ritual at the Beji Temple, located inside a monkey sanctuary in Ubud on Indonesia’s resort island of Bali after a disrespectful video a Czech couple posted on the internet went viral. — AFP photo

UBUD, Indonesia: A Czech couple slammed for disrespecting a Balinese temple took part in a ritual purification ceremony yesterday, after their antics sparked warnings that boorish tourists may be kicked off the Indonesian holiday island.

Sabina Dolezalova and her boyfriend Zdenek Slouka set off a firestorm of criticism this week over an online video that showed the woman laughing as she hiked up her skirt while Slouka splashed her backside with holy water. It was the latest in a string of embarrassing tourist gaffes on the Hindu-dominated island, which attracts millions annually to its palm-fringed beaches, colourful nightlife and ancient temples.

Yesterday, the sombre-looking couple touched pressed hands to their heads as a show of respect at the Beji Temple, located inside a monkey sanctuary in Ubud, the island’s cultural heart. The pair, dressed in traditional clothing, sipped holy water while a Hindu priest led the ceremony as bells rang and incense was burned.

“I’m really glad that we had the opportunity to purify this place and now I would like to say thank you to all the Balinese people because they were very kind to us,” Slouka said afterwards.

Dolezalova added: “We are sorry… and we hope that no one will do something similar again.”

The video shared by the couple — who have some 85,000 followers on Instagram where they post exercise and travel content — was slammed as ‘disgusting’ and sparked calls for them to be booted from Bali.

“They made a mistake sullying our island,” Bali senator Arya Wedakarna told AFP.

“Anyone who violates our traditions must take part in a purification ritual,” he added.

Bali governor Wayan Koster warned that he would turf badly behaved visitors from now on.

“If any tourists act like that in the future, we’re just going to send them home,” he said.

Visitors have been criticised in the past for wearing skimpy clothing or acting inappropriately at Bali’s temples.

This week, an Australian tourist was arrested after a drunken rampage that saw him fly-kick a motorcyclist and break into a home where he assaulted the owner.  That came after an Indian family was pilloried for stealing items from a Bali hotel, while last month a Russian tourist who tried to smuggle a drugged baby orangutan out of the island was jailed for a year.

Some Bali visitors have faced more serious charges, including long prison sentences — or even the death penalty — for drugs. — AFP