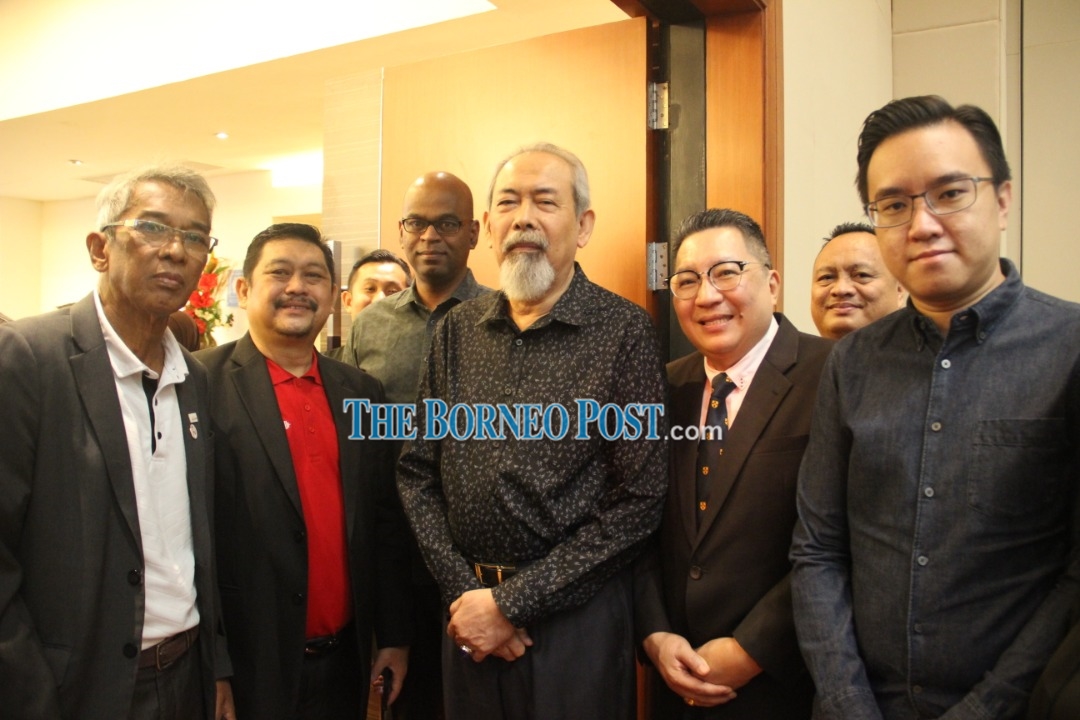 Tun Juhar (front, centre) joins (front, from right) Phoong, Wee, Joannes and Kamaruzaman in a photo-call. Seen on the back row are (from right) Alik and Krishna.

KOTA KINABALU: It may not be a victorious year for Sarawak at the annual Mr Malaysia National championships, but it signifies the need for continuous and comprehensive development of the sport.

In the just-concluded tournament, the team under Sarawak Bodybuilding Association (SBBA) placed fourth in the overall ranking of the total 16 contingents.

In this respect, SBBA president Dato Wee Hong Seng said although Sarawak remained in the top five teams, he regarded the situation at this year’s Mr Malaysia event as both ‘encouraging and intimidating’.

“(It was) encouraging because I saw many new faces, including our very own Asrul Asmat Sefri from Miri who made his Mr Malaysia debut this year.

“The intimidating part is the realisation that we need such momentum to continue.

“I think Sarawak bodybuilding needs to rethink its position, and I know we can do it; after all, we have been Mr Malaysia’s overall champion three times,” he told The Borneo Post when met during the Mr Malaysia National Bodybuilding and Physique Championships 2019’s ‘Farewell Luncheon’ at Klagan Regency 1Borneo here today, where the Yang Di-Pertua Negeri Sabah Tun Juhar Mahiruddin attended as the guest-of-honour.

Adding on, Wee further highlighted the focus on identifying potential bodybuilders who had proven to be very committed in the sport.

“For this group, the SBBA will do its very best to obtain training allowance from various parties, including the Sarawak Sports Corporation, so that their well-being as far as competitiveness is concerned, would be well taken care of.

“Those who represented Mr Malaysia this year will be included in this group.”

Wee also dismissed the need to engage foreign coaches as Sarawak already had its own accomplished ones in the likes of world champions Buda Anchah, Dr Malvern Abdullah and George Awi William.

“Rather than spending much on foreign trainers, the fund saved should go to the athletes, which is way much better,” he added.

Meanwhile, Sarawak fared well in this year’s tournament, with nine out of 12 athletes made the cut to the finals.

Joseph Ladi bagged a silver medal from the Bantamweight (60-65kg) category, behind champion Muhammad Izat Mislan of the ATM and ahead of Mohammad Faizul Mohd Said of Kuala Lumpur.

Most significantly, the 50th edition of Mr Malaysia was also a historic one in that for the first time, it staged the women’s category, which was divided into two disciplines – physique and bodybuilding.