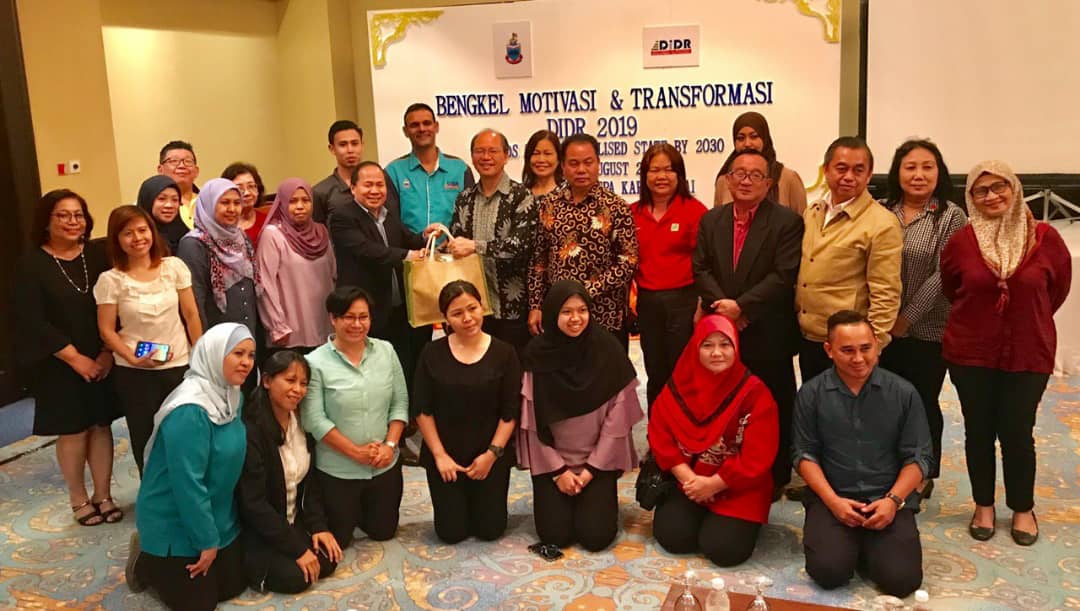 Tangau with the participants of the retreat.

KOTA KINABALU: Sabah’s goal of achieving an industrialised state status is tough but is achievable and realistic.

This was revealed during a retreat organised by the Department of Industrial Development and Research (DIDR) at Nexus Resort, Karambunai on Saturday.

The retreat noted that to be able to achieve this objective, the Sabah state authorities must address effectively the conditions of infrastructures, utilities, connectivity and government delivery system in order to attract at least RM60 billion real investments by 2030 or RM6 billion annually into the state economy.

Thus, the ports’ facilities have to be effectively upgraded in terms of deeper wharfs, sufficient berths and adequate hinterland land.

The roads too have to be more efficient and geared towards serving the industrial parks and industries around the state.

The quality of the workforce also has to be upgraded too so as to serve the needs of the industrial sector in the IR4.0 era.

The retreat was graced by Deputy Chief Minister and Trade and Industry Minister Datuk Seri Panglima Wilfred Madius Tangau who also delivered a talk on the vision of the government and the roles to be played by DIDR staff towards the achievement of this goal.

DDIR director Stephen Sampil said that the objective of the retreat was to update the department’s staff on current industrial policies as well as prepare them to navigate the challenges faced by the organisation as the state government strives to make Sabah an industrialised state like Selangor, Penang and Johore by the year 2030.

This retreat was also in response to the Head of State Tun Juhar Mahiruddin’s policy speech at the State Legislative Assembly sitting in the beginning of this year where he said that one of the thrusts of the present government is to transform Sabah into an industrialised  state with a 35% gross domestic product (GDP) contribution of the industrial sector to the state’s economy by 2030.

It was attended by officers and staff of DIDR as well as the CEOs of Ministry of Trade and Industry agencies such as SEDCO, KKIP, POIC Sabah, SOGDC and Sandakan Furniture Hub.

The retreat themed “Towards an Industrialised State by 2030” zeroed on the current status of the industrial sector vis a vis the state’s economy, the roles played by investments, industries, innovation, technology, entrepreneurship and government delivery system in achieving this industrialised status by 2030.

The challenges and constraints faced in order to achieve this status was also deliberated in the retreat.

The retreat also pointed that the need for a more effective internet connectivity to be comparable to those connectivity in the region at 100 MBBs or more as well as the availability of water supply.

A key takeaway of the retreat is the need for a more efficient and effective government delivery system to formulate, implement and monitor policies, programmes and activities to push and grow the state’s industrial sector.

On this, Tangau said that the government is mulling the creation of a new body to address more speedily and effectively the  tasks and responsibilities as a result of the government objective to achieve an industrialised state by 2030 taking note of the fact that the department’s staff strength has shrunk by around 25 per cent but the functions having increased by at least three folds since the establishment of the department in 1977.

Tangau also impressed upon DIDR’s staff on the need for a positive work culture in the discharge of their duties and responsibilities.