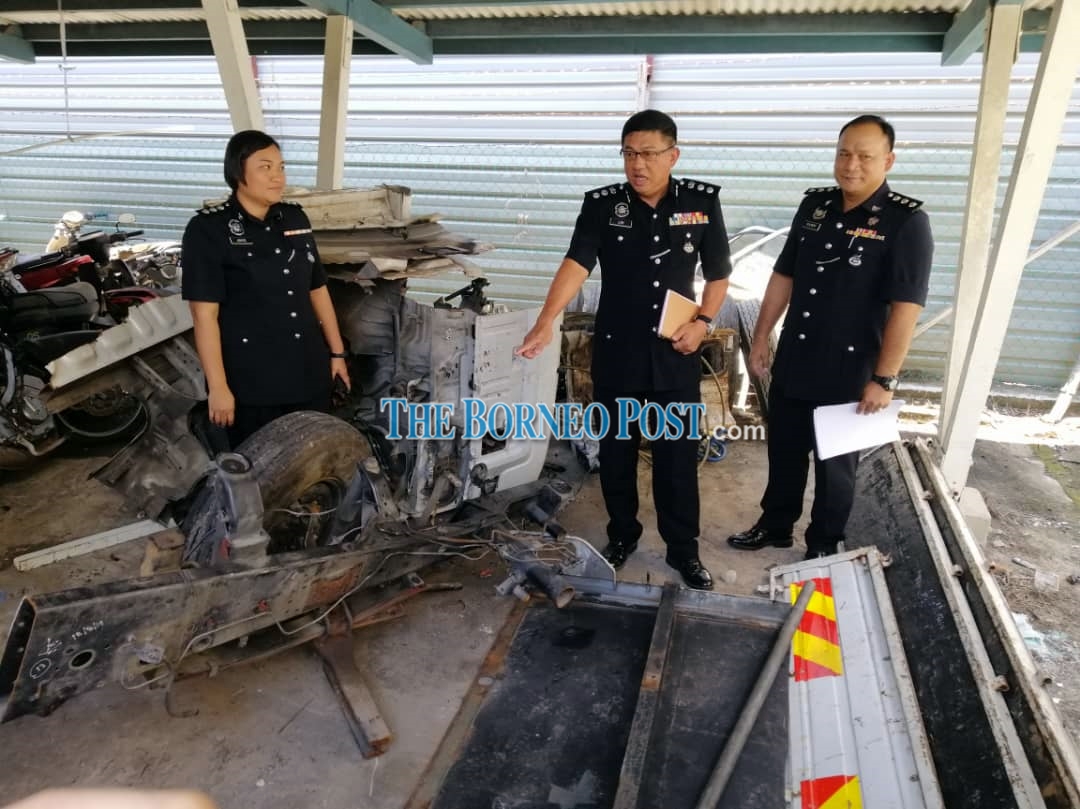 Lim (centre) showing reporters the body parts of the lorry which has been dismantled by the suspects. Also seen are Joyce (left) and Soliment.

MIRI: Police here believe they have made a breakthrough in the murder case of a 60-year-old man known as George Tang Kee Luang who was reported missing on June 29, following the arrest of six suspects and recovery of his lorry.

In a press conference here today (Aug 19), Miri district police chief ACP Lim Meng Seah said the six suspects aged between 23 and 46 were arrested on Aug 15 to facilitate investigation into the case.

“So far, police have recovered the victim’s lorry on Sunday where it has been dismantled by the suspects and was kept in the bushes in Tukau, Bakam,” said Lim.

Lim said police also recovered the victim’s clothing, as well as a knife and an iron rod believed to have been used by the suspect to kill the victim.

“Apart from that, we have also seized a Perodua Myvi believed to have related to the case. Police found traces of blood inside this vehicle and we have sent the sample to the Chemistry Department to be examined,” said Lim.

According to Lim, the victim received a call from the suspects on June 29 to meet at Batu 1 in Kuala Baram.

However, upon arriving there, the victim was hit using the iron rod before he was killed using a knife in his lorry, he said.

Lim said the suspects then transported the victim’s body to Niah and dumped his body into Sungai Suai.

To a question whether the murder was planned, Lim said police believed that it was premeditated.

He pointed out that the case was still under probe but believed that the case had been solved with the arrest of the six suspects and recovery of various items including the lorry and murder weapons.

Tang was reported missing by his family on June 29. He was last seen at the Piasau Industrial area around 3pm.

After three days of waiting for news of his whereabouts, his family on July 2 decided to call for press conference at their residence in Lutong.

At the press conference, Tang’s family offered a RM10,000 reward to anyone with information of Tang’s whereabouts and his lorry which he drove on the day he was reported missing.

Later that day, a decomposing lower half of a man’s body was found floating in the Sungai Suai.

“A sample from the body was taken and sent to the Department of Chemistry. After over a month of waiting, the result came back positive for Tang,” said Lim.

Police have classified the case as murder and are carrying out their investigation under Section 302 of the Penal Code which carries mandatory death sentence, upon conviction.