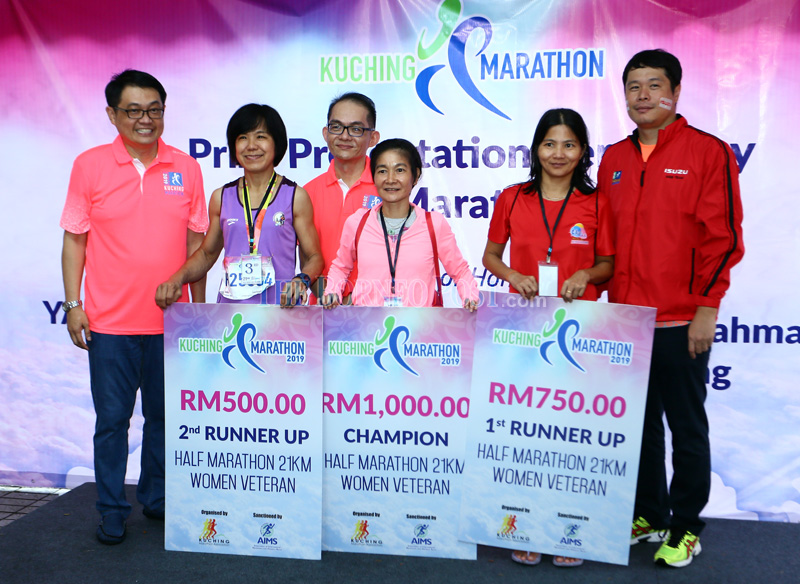 Ling (centre) receives her prizes with runner-up Lee Leh Ha and third placed See Siow Mei as (from back left) Wong, Liew and Kenkichi look on. 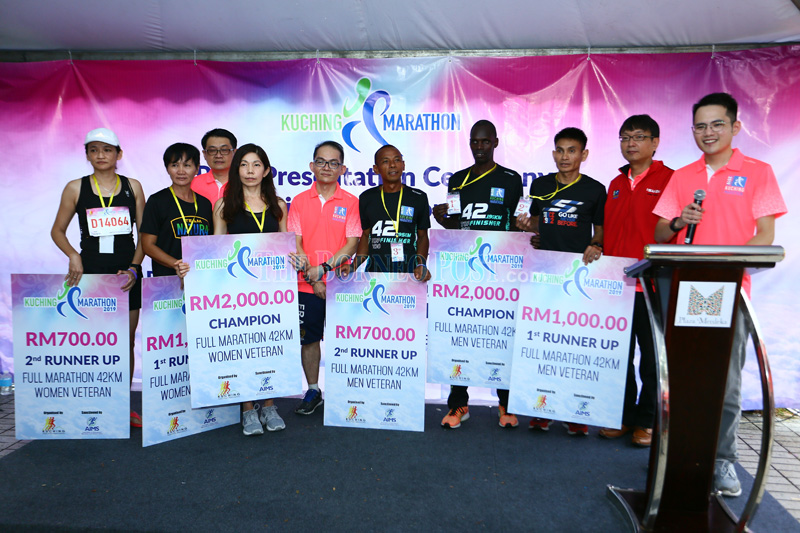 KUCHING: As they say, age is just a number. Distance is just a number too, it seems, to Sibu’s Ling Mee Eng and Kuching’s Chang Ching Lian, local prize winners in Sunday’s Kuching Marathon 2019.

50-year-old Ling finished first among veteran women in the 21km race with a time of 1hr 42min 57sec. Incredibly, it was her third win in a row in this event.

When met by reporters after the prize-giving ceremony yesterday, the mother of two revealed that she has taken part in every Kuching Marathon since its debut in 2014.

“Previously I participated in the 42km run before changing to 21km in the last three years, and I have won it ever since,” she said.

Was the pouring rain a problem? She does not think so as she clocked her personal best time over the distance.

She is already looking forward to her next marathon in her hometown to be held in conjunction with National Day on Aug 31.

Meanwhile, 46-year-old Chang went the full distance on Sunday and finished third in the 42km Women Veteran race with a time of 4hr 7min 27sec.

Unlike the Kenyan runners she’s not a professional.

She like so many others just “compete to run” and did not expect to win any prizes.

But she did train and prepare seriously for her second appearance in the Kuching Marathon.

“I did Long Slow Distance (LSD) training every week,” she said.

LSD refers to a form of aerobic endurance training conducted via running and cycling.

Mental preparation? She just assessed herself through her regular runs.

Previous ArticleCM: No talk of cabinet reshuffle in GPS meeting
Next Article ‘S’wak a good destination for creative pursuits’