Wednesday, July 15
You are at:Home»News»Crime»Woman from Sibu loses RM40,000 to Macau scam 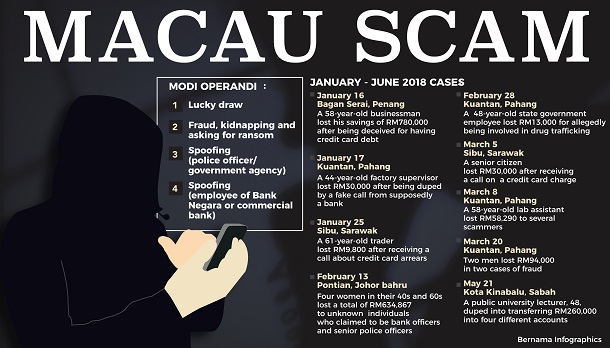 The woman received a call claiming to be from Pos Malaysia Kuching on Aug 11 informing her that her parcel addressed to Fatimah Omar in Taman Ipoh Timur, Perak was detained after it was found to contain 10 copies of MyKads belonging to others and an automated teller machine (ATM) card.

The call was later forwarded to three persons claiming to be policemen from Ipoh police headquarters and Bukit Aman.

One of the callers, identifying himself as a ‘Sergeant Wong’, informed her that her name was found to be involved in a money laundering case involving a suspect named Tam Khung Rhua.

‘Sergeant Wong’ said her name could have been used by Tam and subsequently passed her call to another suspect, identifying himself as ‘Inspector Yong’ from Bukit Aman to settle the case.

The complainant was instructed by the suspect to transfer her money to another bank account provided by him, and he promised to return the money on Aug 14.

She made four transactions totalling RM39,960 within two days to two bank accounts.

She realised that she was scammed after she failed to get her money back as promised and lodged a police report as a result.