Thursday, July 16
You are at:Home»News»Court»Anwar says does not agree with Zakir Naik’s approach to preaching 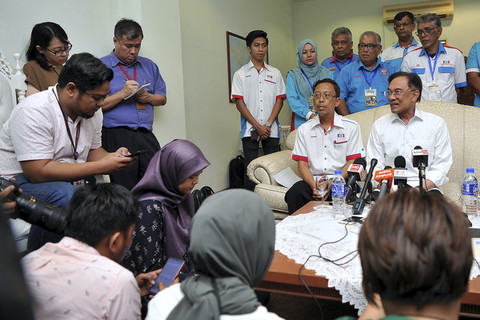 KUALA LUMPUR: The actions of independent preacher Dr Zakir Naik who stirred a hornets nest about Hindus and Chinese in Malaysia in a lecture were uncalled for despite his intention to preach, said PKR president Datuk Seri Anwar Ibrahim.

“I do not agree with Zakir Naik on this matter. I know he is preaching and there is a lot of good in it, but he should not have touched about racial issues in this country,” he said at a “PKR Presidential Tour” series in here yesterday.

Anwar said this when asked about his stand on the contyroversy involving Zakir.

The Port Dickson MP said Zakir should thank the Malaysian government for still providing protection for him to stay in the country.

“The previous government granted him permanent resident status and when Prime Minister Tun Dr Mahathir Mohamad also agreed to allow him to stay here, he should be thankful,” he said.

On PKR’s stand on the preacher, Anwar said the matter would be formally decided tomorrow.

Zakir is facing a police investigation under Section 504 of the Penal Code for intentional insult with intent to provoke a breach of the peace, after 115 reports were received against him.

He has been called up twice to Bukit Aman to have his statement recorded, the first time for five hours last Friday and the second time for 10 hours.

The preacher from India, who is a permanent resident in Malaysia, is alleged to have made controversial remarks against Malaysian Hindus and Chinese during a talk in Kota Bharu on Aug 3, prompting calls for him to be deported to India.

Zakir has been wanted by Indian authorities since 2016 for alleged money laundering and inciting extremism through hate speeches.

On the crisis the oldest Malay-language publishing company in Malaysia, Utusan Melayu (Malaysia) Berhad is facing, Anwar insisted that Utusan should be spared because of its work reporting on the history and development of the country’s education since way back.

“Utusan is a newspaper that is synonymous with the history of the country. Its role as a medium of education cannot be dismissed. Thus, respecting the rights of its employees needs to be addressed.

“You cannot close Utusan just because you are mad at it. I am sad. It had been misused by UMNO but the company needs to be revived and the fate of its employees must be defended, “he said.

The 80-year-old Utusan Melayu company is now in a ‘financial crisis’ resulting in a delayed payment of employees salaries and dues to former employees who signed up for a Voluntary Separation Scheme (VSS).

Earlier today, Utusan’s management had announced that the public listed company would not be closing down and would settle all dues to its staff and ex-staff. – Bernama