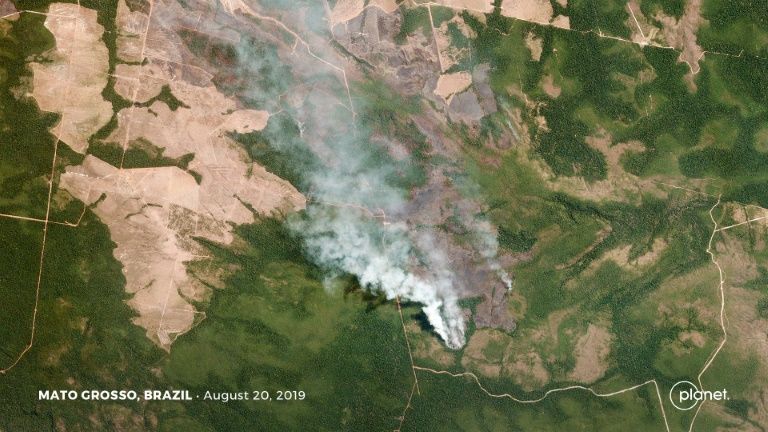 Brazil’s President Jair Bolsonaro said Friday he is considering deploying the army to help combat fires in the Amazon rainforest, amid growing international pressure over the wildfires.

The fires raging in parts of the world’s largest rainforest have sparked protests around the world, ignited a war of words between Bolsonaro and his French counterpart Emmanuel Macron, and threatened a blockbuster trade deal with the European Union.

The latest official figures show 76,720 forest fires were recorded in Brazil so far this year — the highest number for any year since 2013. More than half are in the Amazon.

“The tendency is that,” Bolsonaro told reporters in Brazil’s capital Brasilia when asked if he was considering sending the army to fight the fires.

A decision would be made Friday morning, he added.

Bolsonaro’s remarks come as demonstrations are held around the world over the fires in the Amazon forest, a region considered the “lungs of the planet” and seen as crucial to keeping climate change in check.

In an escalating public row over the blazes, Macron on Friday accused Bolsonaro of lying to him on Brazil’s stance on climate change.

France would now block a trade deal between the European Union and the South American trade bloc Mercosur, which includes Brazil, a French presidential official said.

Macron had tweeted Thursday that fires burning in the Amazon amount to an international crisis and should be discussed as a top priority when the G7 countries meet this weekend in France.

Bolsonaro then blasted Macron for having a “colonialist mentality.”

“The extent of the fires in the Amazon area is shocking and threatening and not only for Brazil and the other affected countries, but also for the whole world,” German Chancellor Angela Merkel’s spokesman said Friday.

Environmental specialists say the fires have accompanied a rapid rate of deforestation in the Amazon region, which in July quadrupled compared to the same month in 2018, according to data from Brazil’s National Institute for Space Research.

Bolsonaro instead attributes the fires to increased drought, and accuses environmental groups and NGOs of whipping up an “environmental psychosis” to harm Brazil’s economic interests.

Neighboring Peru, which contains much of the Amazon basin, announced it was “on alert” for wildfires spreading from neighboring Brazil and Bolivia.

Paraguay and Bolivia are battling separate wildfires that have devastated large areas of their rainforests. – AFP