Tuesday, October 19
You are at:Home»News»Sabah»Hypermarkets encouraged to sell local products 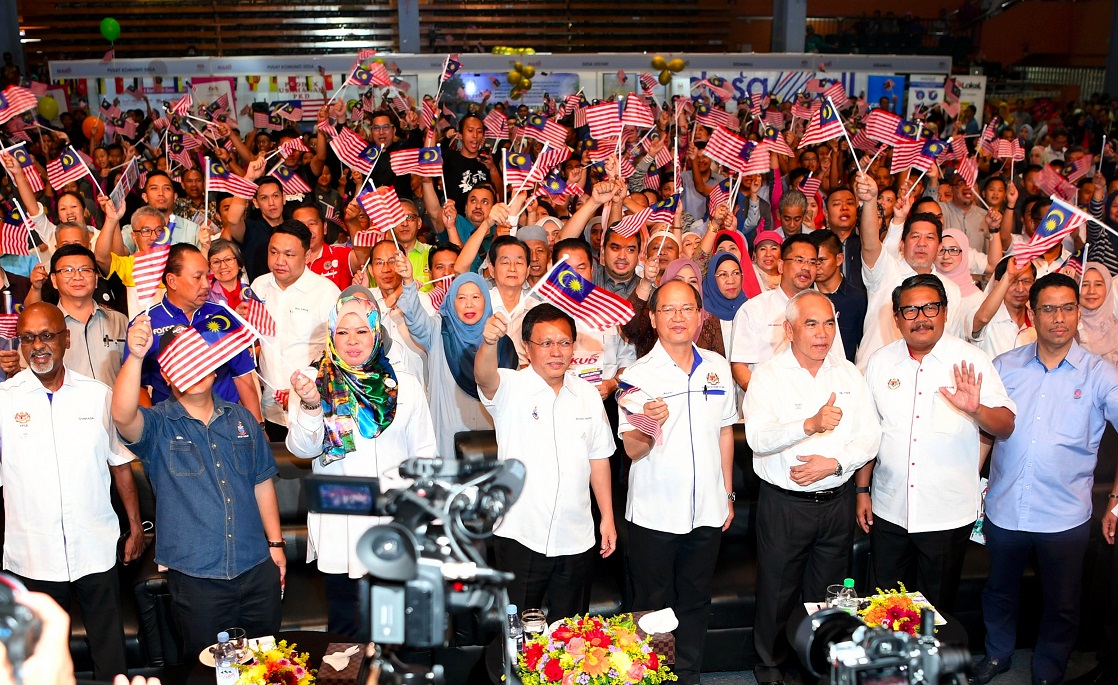 Shafie, Rina and other ministers leading the carnival participants in showing patriotic spirit in conjunction with the upcoming National Day celebration. -Bernama photo

KOTA KINABALU: Hypermarkets are encouraged to sell local products here in the country and also in their international outlets.

The products, however, must be competitive in packaging and pricing, said Chief Minister Datuk Seri Shafie Apdal when launching the Karnival Usahawan Desa (KUD) Zone Sabah at the Kota Kinabalu Sports Complex in Likas yesterday.

He was also of the opinion that there should a dedicated area in hypermarkets for the local products especially those from the rural areas.

Speaking to reporters later, Shafie said that hypermarkets should be encouraged to sell local products with quality, and added, “When I was the Domestic Trade Minister, I encouraged Tesco to do so at its outlets in Malaysia and also at its international outlets.

“But this should only be done in outlets in areas with high population as we do not want to put the small businesses out of business,” he said.

Shafie also said that the State Government would give its utmost support to the Rural  Development Ministry’s initiatives for Sabah for the welfare of the people here.

Issues and problems that crop up will be resolved so that those in the rural areas can enjoy the infrastructure and its benefits.

“We have the Rural Development Ministry in Sabah to assist its federal counterpart and we have decided whatever initiatives like the construction of infrastructure, roads and power supply will be done.

“In the past it was not easy because the infrastructure building projects involved forest reserves and getting approval from the state government was not easy. Now we know how to make this easier because what is important is for the folks in the rural areas to get electricity supply and road connectivity among others,” he stressed.

Shafie is confident that the federal government’s target of providing basic infrastructure will reach 95 per cent of the rural folks by 2025 which is achievable, but stressed that there must be consolidated effort by all involved.

Touching on the carnival, Shafie said that the participation was very encouraging and he hoped that not only the revenue collected from the carnival could not only be increased, it would also encourage more people from the rural areas to venture into business.

“We know that the small medium scale industry is a very important sector and is one that contributes to the state’s growing economy. We are faced with many challenges, and thus need to improve infrastructure and facilities so that the participation of entrepreneurs in the rural areas can be increased.

“This is because resources like raw materials are found in the rural areas, for example, a pomelo based beverage. I have yet to come across a pomelo beverage even though Tenom is a major producer of pomelo in Malaysia.

“We need to look into canning locally produced pomelo juice to allow Sabah entrepreneurs to be successful,” he said adding that there is also a need to ensure the upskilling of Sabahans in entrepreneurship, networking of financial and market support.