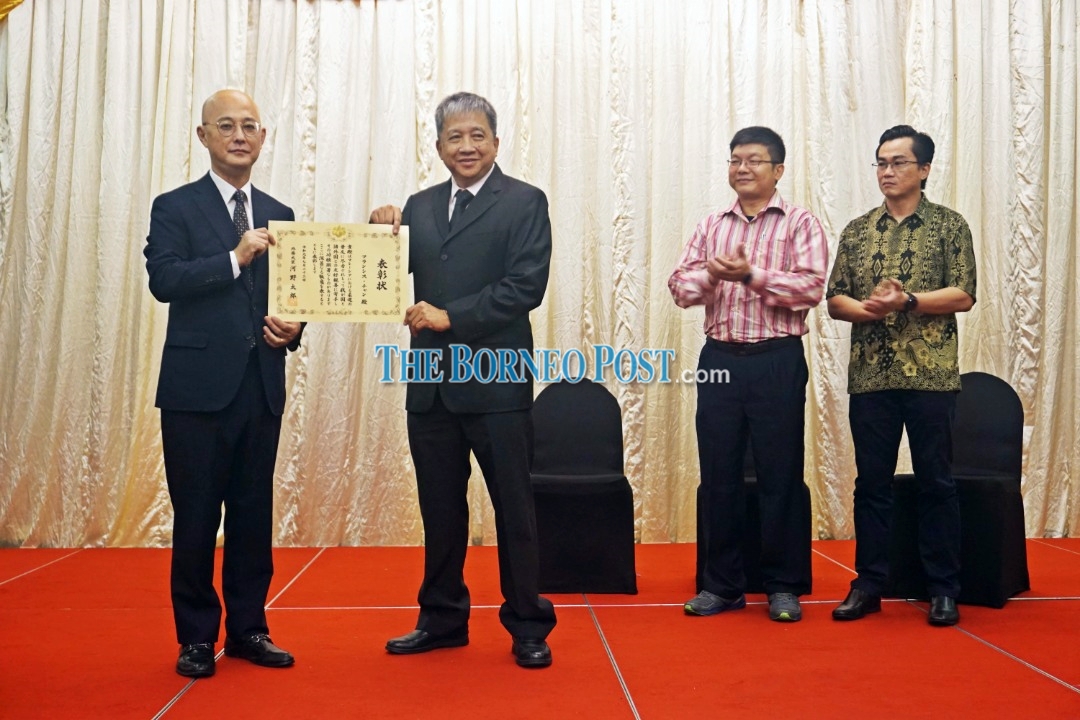 Orikasa (left) presents Chan with an award certificate, while Lau (second right) and Nyam look on.

Embassy of Japan in Malaysia deputy chief of mission Hiroyuki Orikasa said the award was presented to Chan, who is The Borneo Post and Utusan Borneo senior managing editor in recognition of his contributions to enhance Sarawak and Japan relations through judo.

“He is a journalist, but every week he never misses judo training and practice.

“The embassy appreciates his contributions in judo and recommended him to this year’s Foreign Minister’s Commendation award,” he said before presenting the award to Chan in a simple but meaningful ceremony.

Orikasa noted that it was not easy to get the award, which was normally awarded to high ranking officials and such.

However, he said because Chan’s practice and teaching of judo was not only for his own benefit but voluntarily for others, he was deemed deserving of the award.

Orikasa also expressed hope that the young judo practitioners of today would follow Chan’s footsteps in promoting the sport.

Meanwhile, Chan was humbled by the recognition, saying that while it was an honour to receive it, there were also many others who had contributed a lot to judo development, including former instructor Goh Siew Hong.

He briefed those present on the history of the association and sport in the state, and how Sarawak team upset everybody by becoming the overall champion in Sukma 2002, which attracted the attention of the Sports Council.

He also mentioned on the association’s plans to spread its wings to Sibu and Miri in the near future in order to expand its pool of talents.

On preparation for Sukma next year in Johor, Chan said training had already started.

“We are preparing the team, although we have yet to finalise it. We have to prepare early, as many who took part previously are now over the age.

“Now are mostly new players. They are still young but with training for one year or so, there is chance to win medals,” he said.

Chan has been involved in judo for 30 years, with about 10 years as the president.

This year the Foreign Minister’s Commendations were awarded to 206 individuals and 63 groups, in both Japan and overseas.

Chan was among 175 individuals residing outside Japan who got the Commendations.

The Foreign Minister’s Commendations are awarded to individuals and groups with outstanding achievements in international fields, in order to acknowledge their contributions to the promotion of friendship between Japan and other countries.

The Commendations also aim to promote the understanding and support of the Japanese public for the activities of the recipients.