Tuesday, October 19
You are at:Home»News»Nation»Vietnam, Malaysia to work closely to ensure peace in South China Sea 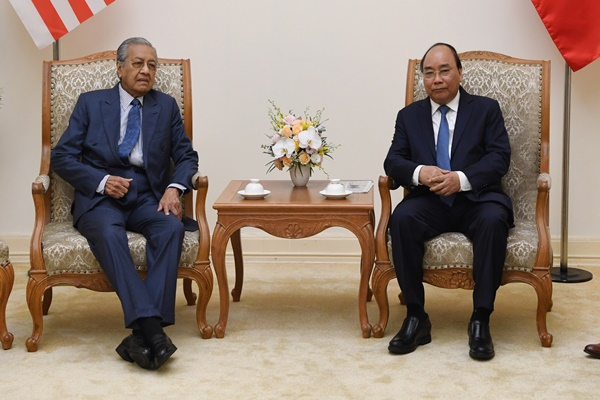 HANOI: Vietnam and Malaysia agreed to work closely with other ASEAN members to ensure peace, stability, safety and freedom of navigation and overflight in the disputed areas in South China Sea.

Vietnamese Prime Minister Nguyen Xuan Phuc said it is important to resolve disputes by peaceful means in accordance to international laws and the 1982 United Nation Convention on the Law of the Sea (UNCLOS) in disputed waters.

“As two friendly neighbours in South China Sea, we agree to work closely with other ASEAN members to respect diplomatic and legal processes and to refrain from the use of force or threats and militarisation.

“…. to fully and strictly adhere to the Declaration on the Conduct of Parties in the South China Sea (DOC) and to achieve a substantive, effective and legally binding code of conduct (CoC),” he said at a joint press conference with visiting Malaysian Prime Minister Tun Dr Mahathir Mohamad today.

Dr Mahathir is on a three-day official visit to Vietnam starting yesterday.

Wang, who was in Bangkok for the annual ASEAN Foreign Ministers’ meeting said it was an important progress in CoC talks which marked a critical step towards the goal of concluding the consultations within three years.

In 2013, consultations for CoC were launched. Both are aimed at safeguarding peace and stability in the region. – Bernama

Previous ArticleNajib to know his fate on Nov 11
Next Article Mahathir advises Malaysians to be ‘clean and respected’ businessmen, investors abroad