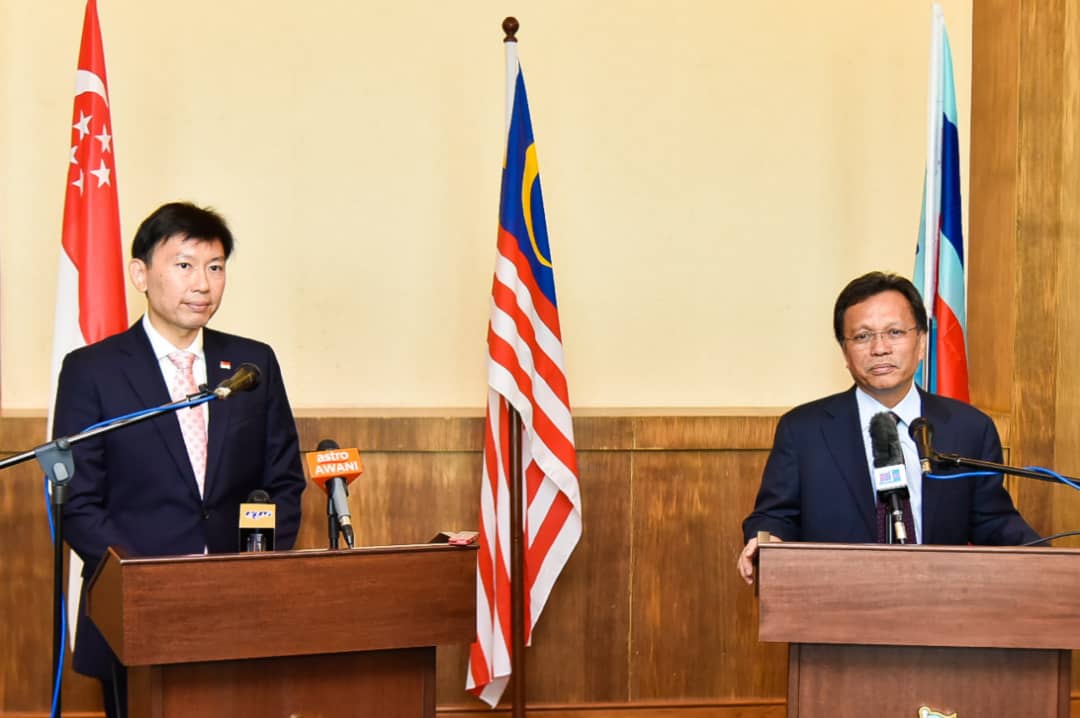 Shafie (right) and Chee during the joint press conference.

KOTA KINABALU: Sabah is aiming to be the platform for Singapore and Malaysia to strengthen their existing ties.

“We discussed how to strengthen ties between Singapore and Malaysia through Sabah. Not only because of the proximity, our culture is quite similar too. So we should make the most of it,” said Chief Minister Datuk Seri Shafie Apdal.

Shafie disclosed that their discussion also included how best the cooperation between the two countries on various sectors like tourism and service could be improved.

“Investors from Singapore are quite keen to come to Sabah and we have one here, Sutera Harbour Resort. There are various sectors that can be explored which will benefit both countries, therefore, there is every reason for us to work together.

“Singapore is an advanced country and Sabah is a small state. Realising this, we need to not only collaborate but also look at how best we can work together in terms of trade and other sectors too,” he said.

Asked if specific projects for the collaboration had been identified, Shafie disclosed that tourism was one of them.

“We are looking at some of them as indicated by His Excellency with regard to tourism. One of the investors is Sutera Harbour and I think they are exploring into other areas, widening it up to ensure the service industry and tourism sector can be explored.

“But of course as we know that labour is not so abundant as before and we need to have some technologies using mechanism and Singapore has the best. They have been able to produce machines which we have used in our plantation sector or other sectors too.

“I think this in one area we can collaborate for a win-win situation. We are looking into it seriously. I have just received a group from the Malaysia Singapore Business Council and they have indicated their interest in the property sector,” he said.

Another area that can be considered is in downstreaming using raw materials from Sabah and the investors can set up a factory in Sabah to produce products not only to export to Singapore but also globally, he pointed out.

Chee, when speaking to reporters, said that Sabah has been an important partner for Singapore with many years of strong business as well as people to people linkages.

“It is a good platform for us to work together and under the able leadership of Datuk Seri Shafie and his team, I am confident we can bring our existing relationship to a higher level,” he said adding that this could include collaboration in education as well as enhancing our interactions between young people.

“We can also include enhancing the collaboration in tourism as Sabah’s tourism sector is growing and if we can do twinning or linkage, tourists visiting Singapore can also spend time in Sabah and vice versa,” he said.

Chee added that cruise tourism is also another possible area Singapore and Sabah can collaborate in as well as investing in infrastructure and in the running of tourism and hospitality facilities.

These are some of the very promising areas that he feels that with further discussions, both governments can bring their businesses together and in the end create more investments and more jobs.

“We enlarge the pie for both Sabah and Singapore. I am also very keen to look at how we can export agriculture products and processed products from Sabah to Singapore and other to other parts of the world.

“That is another area we can discuss. I want to reiterate the very encouraging support from the Chief Minister (and) this partnership can create a lot of win win opportunities for our people and our businesses,” he stressed.

“I think this will raise awareness and enhance such opportunities,” he said in reply to a question if Singapore would also set up such an office in Sabah.

Chee said that it would depend on discussions between Singapore and Sabah.

He pointed out that Singapore companies are really keen to explore investment opportunities and how they can contribute to the growth of Sabah’s tourism sector.

With regard to how the twinning collaboration between Singapore and Sabah would be done, Chee said that there is a need to work through the travel agents and airlines.

But what is more important is the willingness to work together, between Sabah and Singapore governments, he said adding, “I think it is a win-win collaboration because when tourists come from afar they want to spend some time in the region and if you have different places which complement each other, they can spend some time in Singapore and continue their holidays in Sabah to enjoy a slightly different offering then what they experienced in Singapore.”