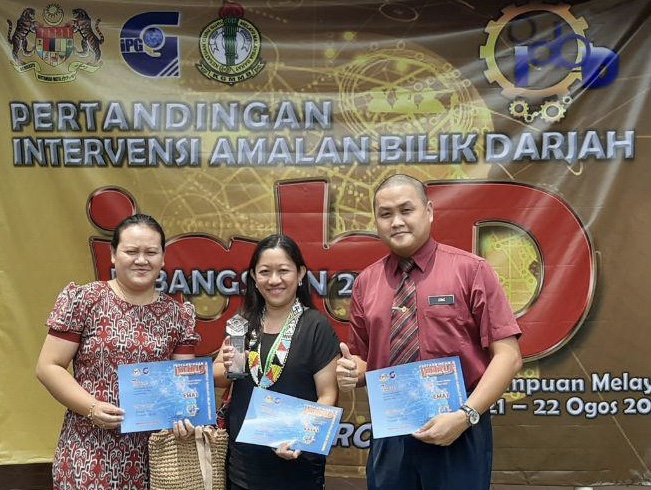 Olivia (centre) flanked by Jackellin and Jong after they were announced as the winner of the competition recently.

The school competed against 99 school teams from all over the country for the Tun Fatimah category at the national level held at the Institute Perguruan Guru Kampus Perempuan Melayu in Melaka.

According to Olivia, the aim of the competition they took part in contained two process innovations which were merged and aimed at improving students’ oral and writing skills through the combination of various thinking processes.

“It was also shown how the innovations were adopted and adapted in the use of other subjects and in different approaches in the teaching and learning process. The innovation arose due to the issue that pupils do not fully articulate their thoughts and ideas effectively especially when they write for examination purposes. Upon utilising the innovation introduced in the classrooms, it has proven to improve the oral skills and essay-writing prowess among pupils,” she explained.

She added that the introduction of the innovation of ThinkQ Grid among her pupils began in 2017 where she taught her pupils the importance of magnifying every single object in the pictorial stimulus and to write like a detective.

“The merger with Think2B IDEAL began in 2018 till now which I had observed much improvement in the way my pupils speak and write. The innovations had gone through evolution from time to time to cater to differentiated learning.”

ThinkQ Grid – Think2B IDEAL was introduced during the colloquim organised by SM La Salle will be adopted and adapted by colleagues in respective subjects taught.

It was also shared in Research Paper Presentations at International Conferences such as ICCTAR, i-CET and CAIELTS, National level competition which was “Mai’ Tah Berinovasi” and in State Level Conferences and competitions such as TEKNOPEN and i-IPC.

“I am proud to be able to encourage participation and produce pupils who have won Essay Writing Competitions in the State and National Level. Besides, being Champions and Gold Award winners in Project Based Learning competitions had proven the ability of my pupils to present the use of the innovations in their learning process with good speaking skills,” said Olivia.

A pupil of the school; Isaac Emmanuel stated, “The two process innovations helped me to develop critical thinking skills that will be essential for my upcoming SPM (Sijil Pelajaran Malaysia) examination and in the future when I enter the working environment”.

The team is very grateful to Azmy Bin Haji Ahmad and Junaidah Binti Majit from Bahagian Teknologi Pendidikan Negeri Sabah for their mentoring and never-ending support from the time they indulged themselves in innovation competitions since 2018.

“We hope that the sharing of ThinkQ Grid – Think2B IDEAL with educators from other states during conferences and competitions will benefit many other pupils as well,” said Jackellin.

Previous ArticleDG: Child car seat use mandatory from next year
Next Article Council for people with disabilities soon – Frankie