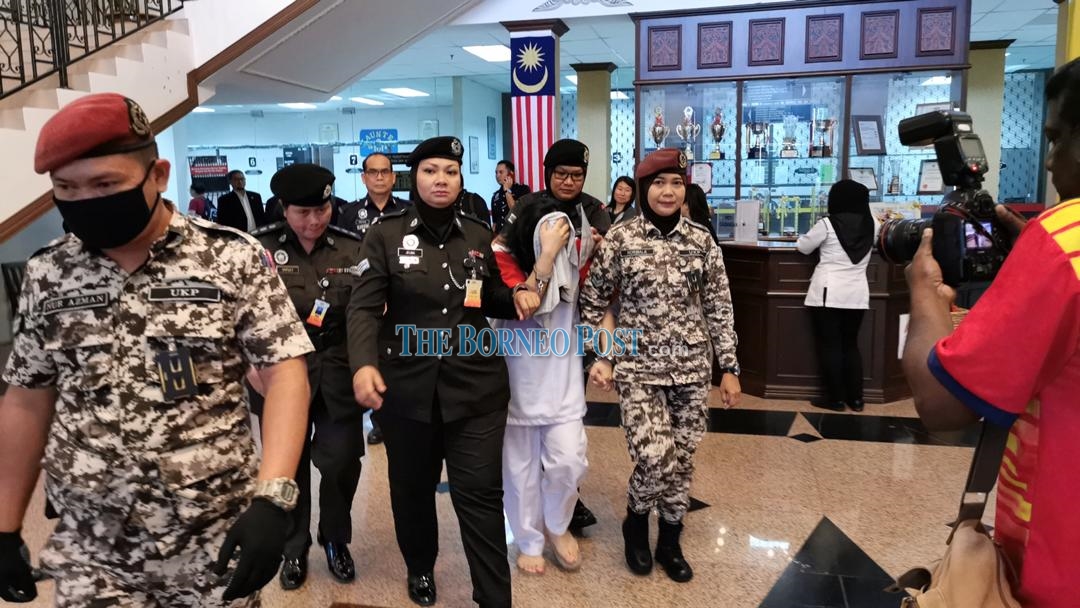 The appellant is escorted out of the courthouse. Photo by Roystein Emmor

KUCHING: The Court of Appeal here has fixed Oct 8 to deliver its decision on the appeal filed by Ling Hang Tsyr, who was sentenced to death for the murder of her husband, Wong Jing Kui, a former HSBC branch manager in Sibu in 2012.

The Court was supposed to make the decision on the fate of the appellant today, after hearing the case on Monday, but the conclusion had to be postponed due to insufficient chronology of the case.

“We need to know the proper chronology because there is a lot of confusion,” Judge Dato’ Zabariah Mohd Yusof said as she announced the new date for the decision to be delivered.

Along with presiding judges Dato’ Suraya Othman and Datuk Wira Kamaludin Md Said, she pointed out that they were confused as to why another accused, Tiong King Guan, was released on bail.

“We need a proper chronology as we are so confused. Further submissions from DPP (deputy public prosecutor) to tell us what is actually happening must be done within 14 days from today.

“We are fixing Oct 8 for a decision. Submissions to our secretary must be done by Sept 13,” Zabariah added.

Kamaludin chipped in: “We are not making any decision today. We have to look further. At the same time, we have to look at the evidence. We are not postponing (the decision) on purpose.”

Lim then immediately raised his concern: “Yang Arif (Your Honour), we are worried about outside interference.”

Zabariah was quick to offer her assurance: “There is no outside interference as far as we are concerned.”

The appellant and Tiong were accused of abetting then principal accused Ling Hoe Ing in killing Wong at his residence at Jalan Ulu Sg Merah, Sibu at about 1.30am on June 14, 2012.

Hoe Ing, who owed Tiong RM10,000 at the time, was jailed 16 years after he pleaded guilty on Oct 1, 2013 to an alternative charge under Section 304(a) of the Penal Code for culpable homicide not amounting to murder.

After Hoe Ing pleaded guilty, the court granted the appellant and Tiong a discharge not amounting to an acquittal on their abetment charge, but the charge was reinstated in February 2015 after the prosecution filed an appeal to the Court of Appeal.

A warrant of arrest was then issued against Tiong after he failed to turn up in court following the reinstatement of the charge.

Both the appellant and Tiong faced an amended charge under Section 109 of the Penal Code for abetment, read with Section 302 for murder, which carries a mandatory death sentence upon conviction.

In Oct 2017, the appellant was sentenced to death by the High Court in Sibu after being found guilty of abetting the murder of her husband.

Tiong is currently still at large.

The offence was committed at Wong’s house in Ulu Sg Merah about 1.30am on June 14 last year.

The pathologist report confirmed that Wong died of multiple stab and slash wounds on his chest, neck and stomach, with defensive cuts on both his arms.

Police found the victim in a pool of blood in his bedroom. Only Wong’s widow and three-year-old son were at home then.