Saturday, July 4
You are at:Home»News»LePaPa Hypermarket opens in Serian 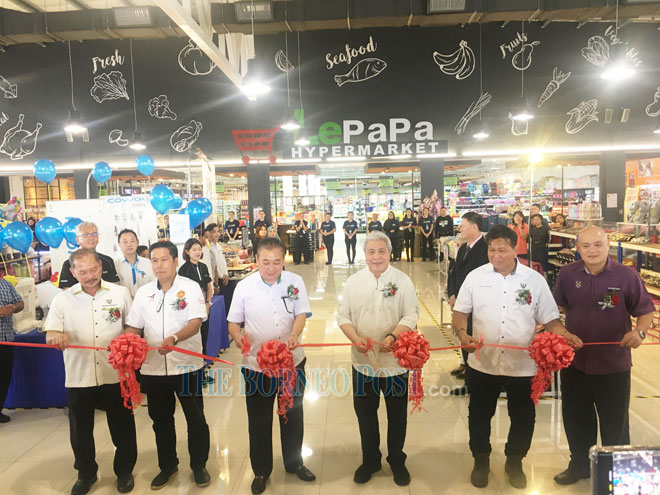 Awang Tengah (third right), flanked by Mussen (second right) and Lee, leads the ribbon-cutting ceremony to mark the official opening of the hypermarket. Also seen from left are Johnathan and John.

The hypermarket is a subsidiary of Tecktonic & Sons Holdings Sdn Bhd, the developer of the 15-acre Serian Durian Piazza Commercial Centre.

The one-storey hypermarket, which offers items at affordable prices, is generally modelled after the Kmart in New Zealand, where Lee visited recently to seek inspiration.

He is also happy about the turnout for the recruitment interview, where more than 800 people applied for various positions available at the hypermarket.

“All in all, the hypermarket’s workforce is 300 people. With this hypermarket, shoppers in Serian don’t have to go all the way to Kuching anymore.

“There is a saying – good things must be expensive. But in LePaPa, ‘cheap, cheap also good’; ‘good, good’ (things can) also be inexpensive’,” he said. 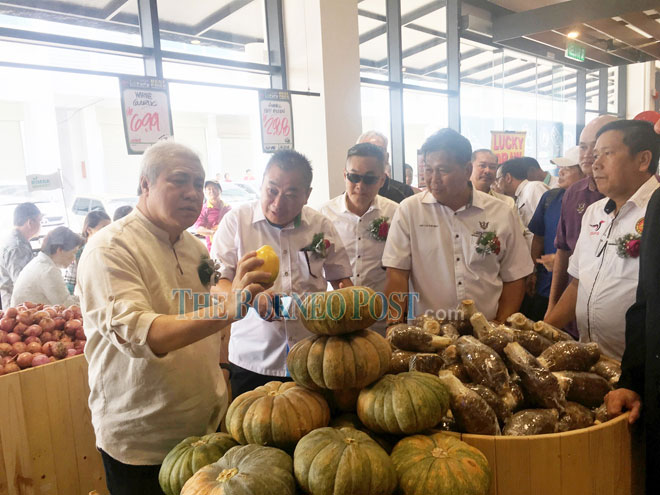 (From left) Awang Tengah being briefed by Lee on the local produce sold at LePaPa Hypermarket in Serian.

On the hypermarket’s name, Lee said it was to honour his ‘papa’ (father), former Bau assemblyman Lee Nyan Choi who passed away earlier this year.

It comprises 111 units of shophouses and a 50-room Roxy Hotel, which also has a 450-people capacity dining and conference room.

There is a silver durian sculpture at the entrance of the commercial centre, to serve as a landmark.

Lee revealed that 110 units had sold out, while a unit was taken up by his own company.

“The Roxy Hotel is the fourth that we have developed so far, after the ones at Mile 3 and Jalan Padungan in Kuching, and another in Sematan.

“With the completion of Pan Borneo Highway and the relocation of Indonesia’s capital city to Kalimantan, we expect the well-linked roads would bring in many visitors to Serian for visits, meetings and seminars. And they need to spend the night at a hotel here,” he said.